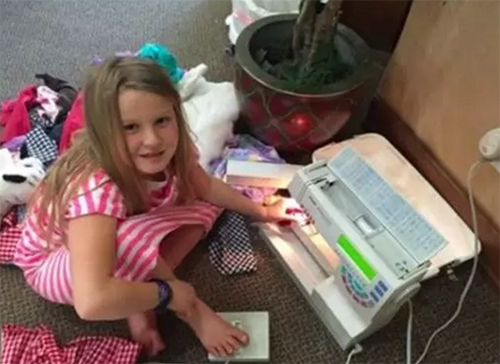 19 Kids And Counting’s Duggar Family had quite a few critics long before their son Josh Duggar’s sex scandal took the internet by storm. Despite their wholesome family values, Jim Bob Duggar and Michelle Duggar were pretty controversial. Several disgruntled viewers complained for years that having 19 kids was wrong on several levels – most importantly being that there was no way you could give each child the individual attention they needed and deserved.

Michelle Duggar all but confirmed those critics’ complaints over the weekend – when she apparently couldn’t remember one of her own children’s names. Michelle uploaded a photo of her daughter Jennifer using a sewing machine on the floor. Aside from the obvious fact that a child sewing on the floor is just a disaster waiting to happen, and she was just a few split seconds away from sewing her finger to the carpet, Michelle Duggar botched the girl’s name.

Michelle Duggar captioned the photo on Facebook, “Looks like Jordyn is getting some good practice.” 19 Kids And Counting viewers were quick to point out to Michelle that not only was her kid in danger of losing a finger, but her name is actually Jennifer. Jordyn is her little sister. Yikes, that’s awkward.

I mean, in Michelle’s defense – her kids do all look an awful lot alike, and all of their names start with the letter “J,” so there is some room for leeway. But, with millions of people criticizing your every move – you would think that Michelle might want to proofread her Facebook posts, or at least verify she is posting photos of the correct kid.

What do you guys think? Was it an honest mistake, are internet trolls over reacting? Or is this just proof that Michelle Duggar and her husband, Jim Bob, really don’t know their own children? Let us know what you think in the comments below!