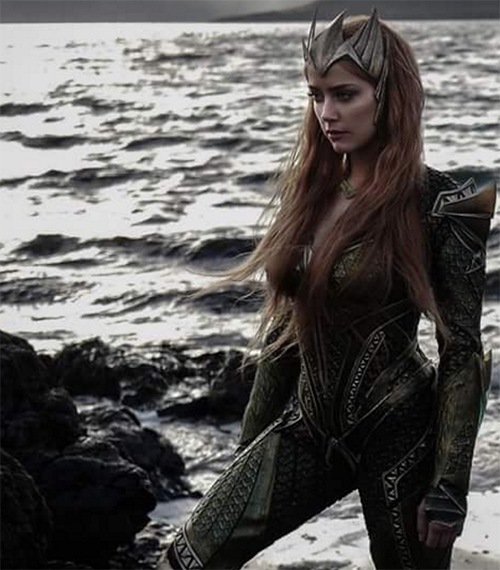 Warner Brothers has released the first photos of Amber Heard as Mera, Queen of Atlantis, in the new ‘Justice League’ movie due out in November 2017. Upon seeing the photos, some fans wondered if the gold digger used her marriage to Johnny Depp, and subsequent divorce, to further her career.

Still, others remarked that Amber looked “bad a**” and hinted that Amber was not entirely truthful in her spousal abuse against Johnny Depp because it sure looks as if Amber can hold her own in a physical scuffle.

Others remarked that since the photos of Amber Heard as Mera have been released they’ll skip seeing the film. Taking a shot at Amber’s gold digging ways, one Facebook follower responded on the Superman vs. Batman Facebook page, “Thanks for the heads up. Now I can ignore [the movie] and not pad her pocketbook.”

Several other harsh comments followed, including fans implying that Amber has no talent and is just a pretty face with no substance. Have the producers of ‘Justice League’ hurt the film’s bottom line by releasing photos of Amber Heard as Mera, Queen of Atlantis? Let’s face it, the actress didn’t get much sympathy when she filed for divorce from Johnny Depp. Public opinion over the nasty divorce was barely swayed in Amber’s favor after a blurry video of what appeared to be a drunk and abusive Johnny surfaced.

After numerous stops and starts, Amber finally gave a deposition and the divorce was settled. Amber was awarded $7 million, which she promised to donate to charity. Rather than pay Amber the money outright, Johnny decided to donate the cash by installments to the Children’s Hospital of Los Angeles and the American Civil Liberties Union on Amber’s behalf.

Now that Amber’s gold digging fingers are out of Johnny’s pockets, the actress needs to hustle for a buck. But her reputation may sink the much anticipated ‘Justice League’ film. Many big name Hollywood stars reputations are on the line with this blockbuster. Ben Affleck as Batman aka Bruce Wayne, Jared Leto as The Joker, Amy Adams as Lois Lane, Jesse Eisenberg as Lex Luthor, and Diane Lane as Martha Kent.

Do we really think fans will boycott ‘Justice League’ because Johnny Depp’s ex-wife Amber Heard has been cast as Mera, Queen of Atlantis? After all, Amber is easy on the eyes, you just need to ignore the fact she’s marginally talented – at best.