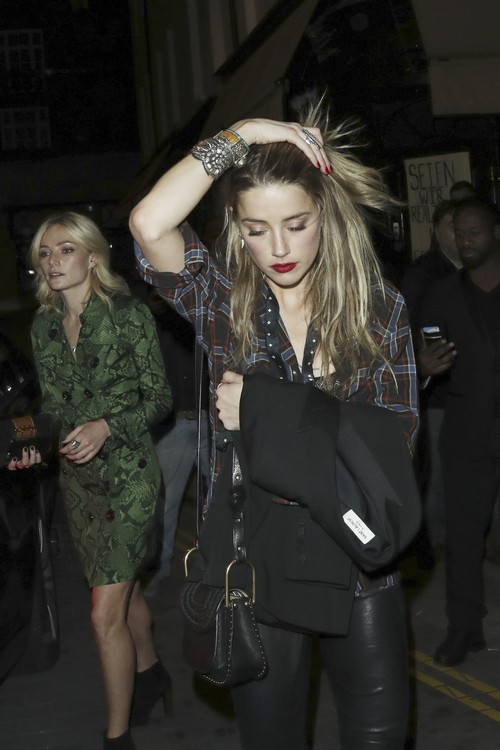 Amber Heard has officially moved on to Cara Delevigne after her very public and very messy divorce from Johnny Depp. The Hollywood actress was spotted out and about with her new lover, model Cara Delevingne.

It’s no secret that Amber Heard has always been attracted to both men and women. In fact, the Texas-born actresses even admitted to being bisexual before she dated and married her now ex-husband Johnny Depp. And even though their divorce was only finalized a few short weeks ago, Amber is reveling in her new life as a single woman.

Amber and Cara were spotted leaving the Love Magazine party at Loulou’s in London. Even though they left the party in separate cars, the two women were clearly together. Is Amber Heard rebounding from her Johnny Depp divorce with Cara Delevingne?

Are the two women having a not-so-secret romance behind closed doors? Is Amber ready to move on with another woman by her side after her stressful and emotional divorce?

Of course, no one really knows if Amber and Cara are just friends or something more, but clearly the model is the reason why Amber has been spending so much time in London lately. There was speculation that Amber wanted to escape the paparazzi attention back in Hollywood until her divorce drama cooled down in the media, but it looks like she has another reason to stay put in the British capital and that’s her new romance with Cara Delevingne.

Of course, Amber might also be stepping out with Cara strategically because she knows it’s going to send a clear message to Johnny Depp: she’s moved on with a younger, hotter partner. There’s no doubt that Amber Heard wants to rebrand herself as a sexy bisexual actress who doesn’t want to be held down by an aging, washed out actor with alleged alcohol and substance abuse problems.

Amber Heard might not have gotten the Hollywood A-list status that she wanted during her marriage to Johnny Depp, but at least she can now go back to her bisexual roots while Johnny Depp continues to hide from the media.

The actor has kept a very low profile after Amber released videos of his scandalous behavior and out-of-control temper during their nasty divorce proceedings.

Take a look at our photo gallery below of Amber Heard and Cara Delevingne and let us know what you think. Is Amber dating Cara? Is Amber trying to send Johnny a message that she’s moved on from their marriage? Drop us a line below with your thoughts.

Amber Heard and Cara Delevingne seen leaving the Love Magazine party at Loulou’s in London, United Kingdom. They left in separate cars with Amber entering her hotel via the front entrance and Cara arriving minutes later via the back entrance. FameFlynet