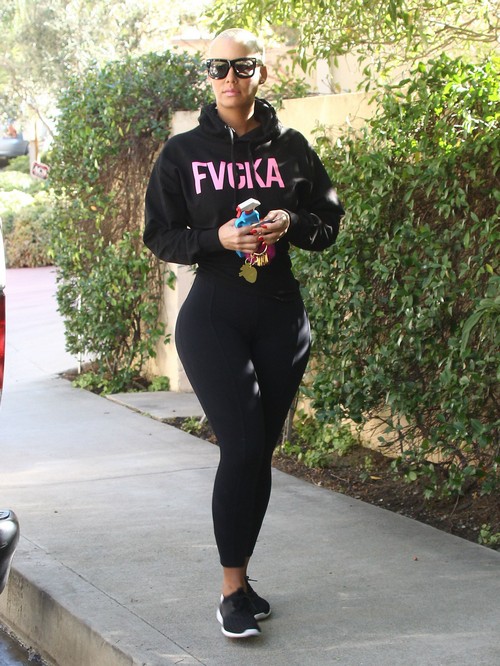 Amber Rose and Drake were spotted together on New Year’s Eve at the E11even nightclub in Miami. Did Amber finally land herself a successful rapper boyfriend again or is Drake just another notch in the former stripper’s bedpost?

Amber’s thirst is real and she’s been all over social media, letting the world know just how much she’s into Drake right now. It all started with an Instagram picture of Rose’s feet as she sat poolside. The caption simply read, “Miami.” Then Amber post two different videos of Drake from his show at the E11even nightclub where she was in attendance.

Amber tweeted the Instagram videos just in case anyone had missed the performance and prefaced one of the links with smiley face emojis with heart-shaped eyes. Yes, Amber, we get it. You have the hots for Drake.

As if that wasn’t enough, the other Instagram video Amber tweeted of the Miami show was prefaced by a tongue-out emoji, a raised-hands emoji and another one in prayer. Amber doesn’t ever keep her crushes to herself, does she?

There also was a private dinner for Drizzy and Amber on Friday, January 1 at the ritzy Prime 112. Drake and Amber reportedly dined behind a private curtain in the wine room of the Miami Beach steakhouse and we can only imagine that sparks were flying.

Drake is a total ladies’ man and Amber has absolutely no shame. On paper, Drake and Amber really do seem like they would be a great couple but in reality, we’re betting that Drake is just sampling the menu.

According to People, Amber Rose was not only at Drake’s show on New Year’s Eve but she was sitting at a VIP table with Drake, 2 Chainz, Lil Wayne and Birdman.

A source for People claims that “Amber and Drake were friendly but there was no public display of affection.” That lines right up with the absence of Amber in any of Drake’s social media.

As a matter of fact, Drake took a picture with everyone who was supposedly at his VIP table on New Year’s Eve and even a few other iconic artists but Amber Rose was nowhere to be found. If Drake is as “smitten” with Amber as reports are suggesting, then why is the rapper keeping her a secret?

Our guess is that Amber is chasing Drake relentlessly and since the rapper is habitually single, he took her up on that generous offer.