Angelina Jolie Cheating On Brad Pitt With Handsome Cameraman On Set of ‘First They Killed My Father’: Younger Version Of Brad? 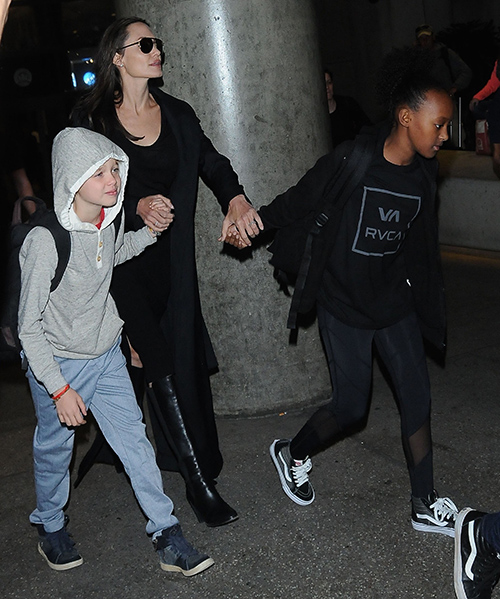 Angelina Jolie is cheating with a handsome cameraman who is a younger version of Brad Pitt? Reportedly, Angelina has taken a liking to a male cameraman while in Cambodia filming ‘First They Killed My Father.’ Are Angelina and Brad headed for divorce?

The National Enquirer reports that a source stepped forward to share this information. Angelina and this great looking guy were having a “lighthearted talk about something. At one point they both disappeared. {Angelina} returned a little later to with a big smile on her face.”

Angelina allegedly has a bit of a crush on this unnamed crew member, and the source went on to say that it’s possible Angelina is cheating on Brad. And this young gentleman is, “like a little puppy for Angie.”

This alleged crush, involving flirting and/or cheating, is not happening, according to a completely different insider. Angelina and Brad are not getting a divorce, and all these reports are false. Also, Angelina is not so stressed out she has lost an extreme amount of weight.

How much more weight could Angelina lose? The actress is already much too thin with bones sticking out everywhere. As far as Angelina Jolie hooking up with a guy who looks like Brad Pitt, why go for a cheap imitation when you have the real thing?

While filming ‘By The Sea’ Angelina Jolie and Brad Pitt reportedly were fighting all the time. The couple admitted it was stressful working together, but denied they were anything like the married couple portrayed in the movie.

Sure, Brad and Angelina probably have had some marital problems during the first year of marriage, who doesn’t? And maybe Angelina was flirting with a cute cameraman, but that doesn’t mean Angie is cheating on Brad. Maybe the guy is following Angelina around like a puppy dog. All it means is the actress is was having a little fun while filming a very serious film about the 1970s Cambodian genocide.