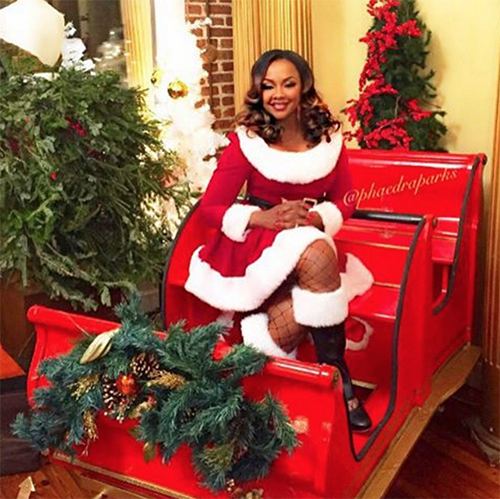 Apollo Nida is not sure if estranged wife Phaedra Parks is still planning for divorce or she will consider reconciling with her incarcerated husband. Apollo did say that he wants to see his sons in person in a recorded phone call with TMZ.

Phaedra Parks has been threatening to divorce Apollo since before he began serving an eight-year prison sentence in September 2014. The Real Housewives of Atlanta star has stayed adamant about moving on from the marriage with her felonious husband. So far, Phaedra hasn’t made good on her divorce threats and Nida confirmed that he is still married to his reality star wife “on paper.”

Will Phaedra Parks ever serve Apollo with divorce papers or are they going to work out their problems? When asked if he and Phaedra will be trying to work out their marriage, Apollo Nida didn’t want to say one way or another. Nida did admit to being “frustrated and angry” and that he wanted closure. It really seems like Apollo is angry about much more than his broken marriage and wishes to spend time with his kids.

What if Apollo’s right-hand woman, Gayle St. Julien, was telling the truth last year when she claimed that Phaedra wasn’t as innocent as she’d like people to believe? If Phaedra was involved in Apollo’s shady business dealings or even knew about them, wouldn’t that make her a hypocrite for walking out on him now? Maybe that’s why Parks still hasn’t filed for divorce even though she keeps talking about how she wants to set a better example for her boys.

As far as his sons are concerned, Apollo did clear up a few things for TMZ and it seems this was the real reason for his call. Nida denied ever using Facetime to speak to Dylan and Ayden since his incarceration or receiving any care packages as many outlets reported. Apollo Nida denied ever agreeing with Phaedra to keep his kids away. As a matter of fact, Apollo said in the interview, “I never agreed on the fact that I didn’t want to see my children.” Nida claimed that he calls the house to speak to his boys, the same way Nida called collect to TMZ Live so he could set the record straight.

Nida is currently serving out an eight-year prison sentence at FCI Fort Dix in New Jersey. The Real Housewives of Atlanta husband was just moved to the new facility earlier in December and was previously housed another low-security facility in Lexington, Kentucky. Apollo believes that his new surroundings are going to be more suitable for a visit with his sons. The RHOA husband said in the phone interview that he thinks Phaedra may bring Dylan and Ayden for a visit now that he’s in a camp and it doesn’t look like a typical jail.

Do you think Phaedra Parks is really going to take her sons to see daddy in jail? So far, even Phaedra hasn’t been to visit Apollo, even without the kids. If Parks breaks down now and heads to New Jersey for a visit, there’s a good chance she isn’t going to be filing divorce papers any time soon.