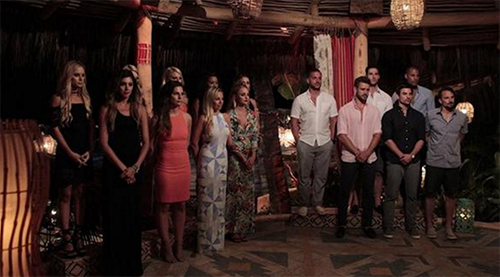 Who gets engaged on Bachelor In Paradise 2016? Season 3 of The Bachelor and Bachelorette spinoff is set to premiere on August 2 on ABC. Even though the show hasn’t even began, the infamous blogger Reality Steve has already spoiled the finale. According to Reality Steve’s BIP spoilers, THREE couples will get engaged on the season finale, and producer Mike Fleiss has already been teasing a Bachelor In Paradise double wedding on social media.

Bachelor In Paradise 2016 spoilers tease that there will be a ton of hot and heavy couples on this summer’s season. But, at the end of their time in paradise, only three of the couples will opt to stay together and get engaged. Reality Steve’s Bachelor In Paradise spoilers tease that the following couples will leave paradise engaged: Josh Murray and Amanda Stanton, Lace Morris and Grant Kemp, and Carly Waddell and Evan Bass.

Ironically, this is not the first time that Josh Murray will be getting engaged on national television. He was Andi Dorfman’s Bachelorette winner and brief fiancé before they called it quits and split. Everyone remembers the adorable Amanda Stanton from Ben Higgins’ season of The Bachelor. Amanda got a raw deal on The Bachelor, Ben met her two children and spent the day in her hometown and even helped her put the kids to bed, and then he dumped her. Here’s to hoping that Josh Murray is ready to be a step-daddy.

Carly Waddell made it to the finals on Chris Soules season of The Bachelor and was also dumped. Then, she appeared on Bachelor In Paradise Season 2 and was dumped again and totally blindsided. Maybe the third time will be the charm for the aspiring country music singer. Hopefully Evan Bass has grown up a bit since his time on The Bachelorette. He seemed more worried about “getting Chad in trouble” than trying to start a relationship with Jojo Fletcher.

The final Bachelor In Paradise couple doesn’t seem too promising – but, hey, stranger things have happened. Lace Morris is a little loopy. We’re pretty sure Ben Higgins is still a bit scarred from trying to date her. And, Grant Kemp was pretty quiet on The Bachelorette, but according to social media and his ex-girlfriend, he’s a total player and only joined the show because he wanted to be famous.

So Bachelor and Bachelorette fans, are you as excited as we are about the Bachelor in Paradise season 3 premier? Which couple do you think will actually get married – Josh Murray and Amanda Stanton, Lace Morris and Grant Kemp, or Carly Waddell and Evan Bass? Share your thoughts in the comments below and don’t forget to check CDL for all of your Bachelor In Paradise Season 3 spoilers and news.