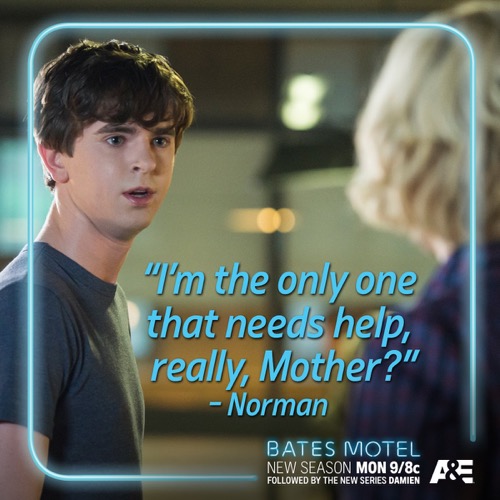 Bates Motel airs tonight on A&E with an all new Monday March 28, season 4 episode 4 called “Lights of Winter” and we have your weekly recap below. On tonight’s episode, Norman (Freddie Highmore)  goes on an adventure with a new friend; Norma (Olivia Cooke)  gets a taste of happiness at a festival in White Pine Bay.

On the last episode, Norma and Romero took a big step; Norman struggled to accept his new circumstances; and Dylan tried to rid himself of old business. Did you watch the last episode? Did you miss it, we’ve got a detailed recap right here for you.

On tonight’s episode as per the A&E synopsis, “Norman goes on an adventure with a new friend; Norma gets a taste of happiness at a festival in White Pine Bay while Romero faces a potentially awkward situation; and Dylan is caught between two families.”

Tonight’s episode is going to be a great one and you’re not going to want to miss it. Bates Motel airs on A&E at 9:00 PM EST, while you wait for our recap hit the comments and let us know how excited you are about the season 4 episode 4.

Norman is more convinced than ever that he wasn’t sick, but that was leading him to make unfortunate decisions on tonight’s episode of “Bates Motel”.

Apparently Norman didn’t want to wait around until he could talk his doctors into believing that Norma was the actual serial killer in the family, he just wanted out of the psychiatric facility as soon as possible. So he eventually befriended a young man there that claimed to have come up with a way for them to simply break out of Pineview together and he told him that he would think about it. Meaning that was going to be his Plan B if Dr. Edwards didn’t ultimately believe him about Norma.

Only that turned out to be his only plan when the good doctor did end up thankfully doubting Norman’s claims. Although he had at least tried to frame it better. Edwards would in fact later tell Norman that he has seen many patients that have made claims about people that aren’t real though he still would report everything they said to the police. Just in case.

But Edwards also said that he couldn’t ignore Norman’s primary care because as his doctor that was his main concern. While the investigation itself was now in the hands of the police. Who would follow up with Norma seeing as that was their area of expertise.

So all Norman took from that conversation was that Edwards thought he was lying and therefore he began to ignore everything else that Edwards had said. Including needing treatment for the black-outs if nothing else. And Norman then chose to focus on breaking out with his friend because that way they didn’t have to around for little inconveniences. Like evidence or his mother truly being guilty.

Yet, Norma was finally getting a chance to make a life for herself and it did seem as if she was enjoying her latest marriage to Romero. The two would have actual conversations that weren’t about Norman or disappearances and so they got their chance to be excited about the little things together. Such as the upcoming festival. And how her son Dylan was doing.

The sheriff apparently hadn’t even known that Dylan and Emma were together. So that had come as shock, but he had been happy for them and Norma had later passed on his regards to Emma when she saw at the hospital. Where Emma was doing great, but sadly all good things must come to an end. Emma’s father wanted to take her to a more equipped hospital that would be some distance from town and so Dylan had to make a choice about whether or not he was ready to follow her.

And Romero’s past was slowly ruining what he had been trying to build with Norma.

A DEA Agent had coming sniffing around about Bob Paris, Rebecca, and what was going on at the bank in town so he had asked the sheriff to help with the investigation. However, Romero himself had been in too deep with those people and there was currently a safe filled with cash that wasn’t technically his in Norma’s basement. So Romero had merely pretended as if he was willing to help but all the while he was focusing on ways to impede the very same investigation that he was afraid would implicate him.

And therefore he was trying to play it safe. But there was also the problem of Rebecca. Rebecca had earlier asked him if there was an investigation into the bank and he had said no although there hadn’t been anything to report at the time. Only that’s since changed and he still wanted to withhold the truth from her because now they both mistrust the other.

Rebecca had apparently asked him about Bob Paris. Yet, Romero claimed not to know what happened to Bob when the truth was he knew exactly where the other man was and so his silence was only making Rebecca more nervous around him. As if she could guess that Romero was hiding something and that could explain why Romero and Norma eventually found someone had ransacked their house.

But while Norma’s new life with the husband she finally thought was a winner was beginning to collapse, her son had managed to break out of the facility. Norman and Julian had made a run for it and their first stop had been at a strip club where Julian hoped to put his parents’ “guilt” money to use. So they had bought themselves a couple of private dances and Norman, who had another episode that made him believe he was Norma again, was actually enjoying himself.

Only Julien had a violent outburst that led to the cops getting called. So Dr. Edwards quickly found the two young men and he had even offered to drive Norman back to the facility while Julian went to the hospital for a cracked rib. Yet the doctor noticed that Norman had been quite about everything so he had asked Norman about why he had broken out and Norman had been forced to admit that he didn’t remember making that decision.

Or going to the strip club for that matter. So that’s when Norman realized that he did need help and he had asked the doctor to treat him.