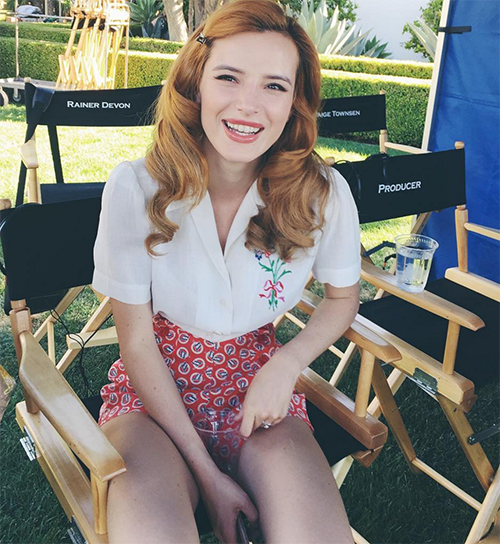 Is Bella Thorne changing her appearance in order to land new movie roles? That’s what both fans and critics alike can’t help but wonder as the 18-year-old actress has looked drastically different in the last several months.

The former Disney channel star is slowly becoming the next Hollywood sex siren as Bella has quickly shed her girl-next-door image in hopes of becoming the next Kylie Jenner. After all, Bella is following in the footsteps over other Disney stars like Miley Cyrus and Selena Gomez who have put their Disney pasts behind them the moment they began wearing more racier and revealing clothes while also performing proactively on stage. And it looks like Bella Thorne is no different. There’s a new report that suggests she might have even gone under the knife to help enhance her looks.

According to OK! Magazine, there is a good chance that the Miami native had secretly undergone breast augmentation surgery. While only Bella knows for sure, many experts in the medical field believe that Bella’s bigger chest isn’t just another contouring trick she learned online, as she could have easily gone under the knife earlier this year. While Bella continues to get slimmer in her well-publicized bikini photos, if there’s one thing that’s continually getting bigger, it’s without a doubt her chest.

Of course, it wouldn’t be surprising if Bella went the plastic surgery route in order to help her Hollywood career. After all, the only actresses who are getting attention these days are the ones that fit Hollywood’s ideal standards when it comes to their looks, size, and shape. Bella is no different than the good number of actresses who come to Hollywood every year in hopes that they’ll make it big within a short matter of time.

Sure, Bella already has a solid television career behind her, but there’s no doubt that she wants to be the next Kylie Jenner when it comes to achieving her level of fame.

Tell us CDL readers, what do you think? Did Bella Thorne go under the knife? Is the actress changing her appearance in order to land better movie roles? Is Bella Thorne going to be unrecognizable in the next ten years? Let us know what you think by dropping us a line below and of course, check back with CDL for all the latest news on all of your favorite celebrities right here.

who says #summer has to be over?

sometimes I have impromptu photoshoots while drinking a smoothie for no reason at all…normal yeah? #backtoreality #tomorrow