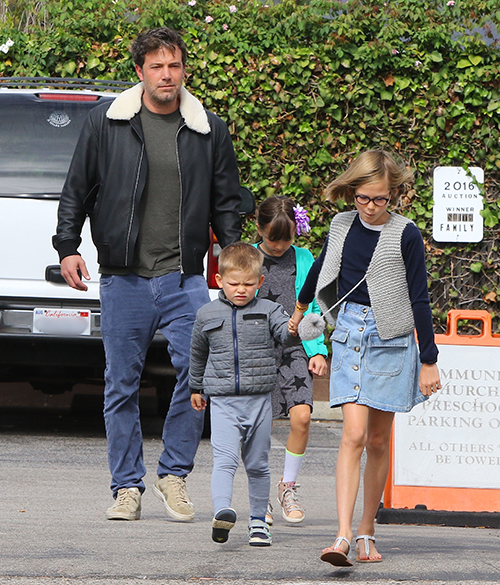 Ben Affleck was spotted this past weekend attending church with his three children, Violet, Seraphina, and Samuel. The Hollywood actor, who is separated from Jennifer Garner, looked both disheveled and tired with his wife nowhere in sight.

Ben Affleck has definitely had his ups and downs over the years and is desperately trying to repair his image from a cheating husband and former alcoholic to a church-going, hands-on father who is nothing but attentive and supportive when it comes to his family.

Sure, Ben Affleck might look like he hates it whenever he sees the paparazzi, but in this case, he knows that he needs to use the photographers to his advantage. After all, if there’s anything that Ben Affleck has going for himself that’s positive these days, it’s his family-man image and, of course, his mysterious relationship with his estranged wife Jennifer Garner.

Ben Affleck wants to show the world that he’s not the irresponsible, immature man that almost shattered his family when he allegedly cheated on Jennifer Garner with his children’s nanny last year. And what better way to prove to the public that he’s a changed man than to attend Sunday mass with his children, especially with the paparazzi documenting his every step.

It’s a move that image-savvy Jennifer Garner has made plenty of times in the past and that’s why Ben Affleck knows he needs to do whatever it takes to fix his tarnished public image, even if that means looking like he’s serious about his family and religious values.

Only his closest friends and family members know the real truth about him, but that won’t stop Ben Affleck from manipulating the media once again. His wife Jennifer Garner is a mastermind when it comes to that and Ben Affleck knows he needs to fix his errors before his career and, ultimately, box office numbers suffer for it.

But then again Ben Affleck might be one of Hollywood’s leading men, but when it comes to the distressed look on his face, he’s failing at the one acting job he should be so natural at doing by now. That of course is Ben Affleck’s family man role.

Take a look at our photo gallery below and tell us CDL readers, do you think Ben Affleck is purposely using the paparazzi to help repair his image as a caring, church-going family man? Has Ben Affleck finally learned from his wife Jennifer Garner how to use the media to his advantage? Let us know by dropping us a line below and of course, check back with CDL for all the latest updates on Ben Affleck, Jennifer Garner and all of your favorite celebrity couples right here.