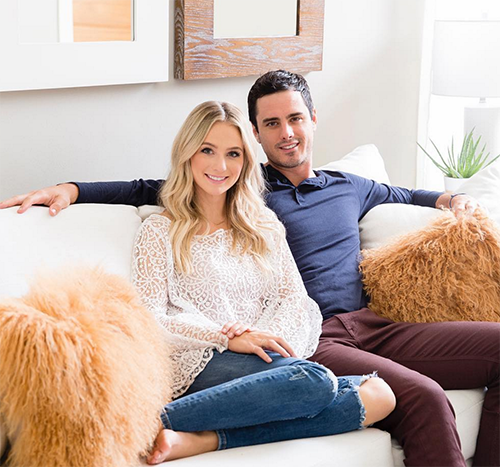 Ben Higgins and Lauren Bushnell had joint Bachelor and Bachelorette parties in Las Vegas just a day after announcing that they’re in couples counseling and haven’t set a wedding date. But a photo posted by Lauren has Bachelor 2016 fans wondering if Ben and Lauren secretly got married in Vegas.

Ashley Iaconetti, who couldn’t manage to find love on The Bachelor 2015 or on seasons two or three of Bachelor in Paradise, was one of the ladies invited to the Vegas celebration. Ben and Lauren also invited along Emily and Haley Ferguson, Tanner Tolbert, Amanda Stanton, Jared Haibon, and JJ Lane.

A camera was along to capture the partying and, eventually, the edited footage will air on the Freeform original series Ben and Lauren: Happily Ever After? The premiere of the couple’s new reality show is Tuesday, October 11.

Why do we think there was a secret Las Vegas wedding for the couple who found love on Bachelor 2016? Lauren may have let the cat out of the bag when she posted a photo and wrote, “SO excited to share our first home as nearly-weds with you.”

It’s obvious the photo was taken before Lauren, Ben, their guests, and the camera crew took off for the Las Vegas partying. When the pic was snapped, Ben and Lauren were “nearly-weds.” Are they now newlyweds after the trip to Vegas?

Lauren goes on to thank the decorators for helping design the new home in a manner that makes both Ben and Lauren comfortable. It’s just one big advertisement for the Denver-based interior designer.

Ben weighed in with a photo snapped in Vegas – the couple stayed at the MGM Grand Las Vegas. Lauren is standing behind Ben with her arms wrapped around him. You’ll see Lauren’s engagement ring. But, if you look a little bit closer, it looks as if a diamond wedding banded has joined the giant diamond on her left ring finger. Oops!

Did Bachelor 2016 lovebirds Ben Higgins and Lauren Bushnell secretly get married in Vegas? We guess now we’re all sucked into watching Ben and Lauren: Happily Ever After? to find out.

SO excited to share our first home as nearly-weds with you Thanks to @JossandMain, we were able to design a space that matched both of our styles. Shop the look of our Denver home right now on jossandmain.com! #jossandmainmakeover #sp