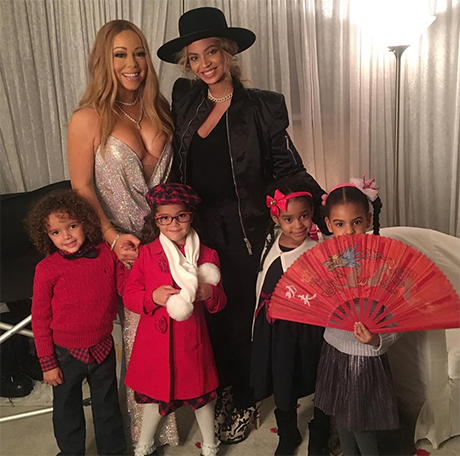 Kanye West is not going to be pleased when he finds out about Beyonce and Blue Ivy’s latest outing. Sources say that Beyonce threw some shade his way by happily posing for a photo with Mariah Carey. Beyonce’s daughter, Blue Ivy, and Mariah’s twins, Monrow and Moroccan, were also in the photo. This of course comes after Kanye slammed Jay-Z for not reaching out and allowing their children to play together.

Sources say Bey brought Blue Ivy to see Mariah at her holiday concert in New York City this past weekend. It’s without a doubt that Kanye West won’t be happy when he sees Beyonce and Mariah Carey’s photo together. He’s always considered Jay-Z and Bey to be a part of his family. That’s why he desperately wanted Bey and Kim to get along. But that simply hasn’t happened. North West and Blue Ivy haven’t even had a play date together and it looks like it won’t be happening any time soon, too.

Many sources close to Beyonce and Jay-Z say that one of the reasons why they’ve distanced themselves from Kanye is because they simply want nothing to do with Kim Kardashian. Beyonce has never been a fan of the reality television star and that’s why she forced Jay-Z to cut ties with his friend. Instead of attending Kimye’s wedding in Italy, Bey and Jay opted for a weekend in the Hamptons instead. But what hurts Kanye the most is the fact that his daughter, North West and Blue Ivy, have never had a play date together. The two toddlers have never even met even, though they only live a few minutes away from each other in Los Angeles.

So far, Kanye has not made any comments about the photo. But many sources say that the rapper is going to say something about it sooner rather than later. After all, Kanye ranted about Jay and Bey during one of his performances before he was hospitalized for his mental breakdown. Even his fans know he won’t be quiet about this for very long.

Do you think Beyonce is throwing shade at Kanye by posing with Mariah Carey and her kids? Are you surprised that Beyonce and Mariah are even friends? Or do you think Beyonce is simply ignoring all of Kanye’s rants and drama? Let us know what you think by dropping us a line with your thoughts in our comments section. Also, check back with CDL for all the latest news and updates on Kanye West.

Excited for another show at @beacontheatre tonight! See you at 8 PM, lambs! #AIWFCIY

Are you watching? 😘❤️All new #MariahsWorld tonight on @eentertainment! Be sure to tune in at 9/8c.