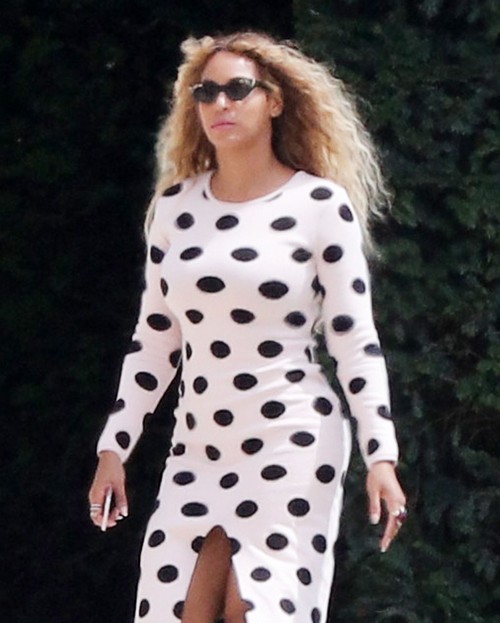 Beyonce and Jay-Z’s marriage is in trouble again according to new reports. There’s speculation that Jay-Z is upset with Beyonce’s near naked-costumes on her current Formation Tour. Beyonce’s career success has mostly been dependent on her over-the-top performance and the Jay-Z marriage drama she fuels in her song lyrics.

Although her surprise albums have always created a lot of media and social media buzz, Beyonce hasn’t had a hit single in years and that’s why she depends on her performances to help generate interest in her music and to make money – cause let’s be real here, money is what Beyonce and Jay-Z are all about. That’s why it’s no surprise that Beyonce’s risky Formation tour costumes has her husband Jay-Z concerned.

According to OK! Magazine, Beyonce might even be using her barely-there costumes to infuriate her husband on purpose. Beyonce has hinted about Jay-Z’s cheating allegations in the lyrics of her hit song, “Sorry,” with a now famous line that includes woman Jay-Z cheated on his wife with that Beyonce refers to as “Becky with the good hair.”

While no one knows who Becky is for sure, there have been rumors swirling that she can be any of Jay-Z’s mistresses, from Rachel Roy to Rita Ora. Both women have denied the allegations.

One source close to the situation dished, “Beyonce sure has got a few things off her chest with her ‘Lemonade’ album, but she’s still not totally forgiven Jay. She does have meltdown moments when she admits she’s struggling with forgiving his infidelities and thinks the only way to even up the situation is for her to cheat. She wouldn’t, but she’s totally enjoying watching him try and hide his fury when she’s all over another guy. She’s also totally vamped up her stage wardrobe and it’s all about flashing the flesh. Re-empowering herself and getting a little revenge on him is what’s driving her right now.”

Beyonce’s tactics might work for now, but in the long run the singer might end up divorced if she continues to provoke Jay-Z with her on stage antics. Plus, this will only prove critics right that Beyonce can only get attention with what she wears rather than what she says or sings.

Clearly, Beyonce wants to be remembered as the greatest singer in the world and not a scantily clad entertainer who uses her performances to get back at her husband Jay-Z for his alleged infidelities.

Tell us CDL readers, do you think Beyonce’s half-naked costumes have Jay-Z upset? Are Beyonce’s career choices causing trouble for her marriage?

Of course CDL doesn’t believe that Jay-Z is jealous or upset by Beyonce’s indecent exposure and in fact encourages it as part of business strategy. The only uncensored raw view fans ever had of Beyonce and Jay-Z was when Solange gave Jay-Z that elevator beating as Bey looked on calmly. Drop us a line below and of course check back with CDL for all the latest news on Beyonce, Jay-Z and all of your favorite celebrities right here.

Beyonce and her husband Jay-Z enjoy lunch at Loulou restaurant in the Tuileries’s garden with their daughter Blue Ivy in Paris, France on July 26, 2016. Beyonce was rocking a tight polka dot covered dress which showed off her curvy physique during the outing. FameFlynet