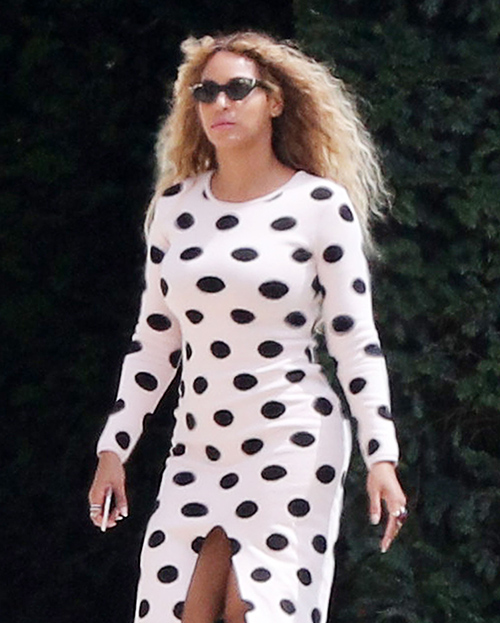 Is Beyonce pregnant with her second child? Is the chart topper trying to hide her baby bump from the media? That’s what fans can’t help but wonder as Beyonce was spotted suspiciously covering her midsection while she was vacationing with her husband Jay-Z and their daughter Blue Ivy in Italy this week.

Beyonce and Jay-Z have definitely had their fair share of ups and downs in their marriage lately. With Jay-Z cheating rumors, Beyonce and Jay-Z divorce speculation and of course the mystery behind ‘Becky with the good hair’ lyrics in the singer’s smash hit, ‘Sorry,’ the couple has been doing everything they can to put on a united front. After all, Beyonce’s image means everything to her and if she doesn’t have control of her career or her marriage for that matter, then she would quickly lose her status as the biggest entertainer on the scene right now.

With that in mind, that’s why Beyonce knows that her marriage to Jay-Z has to stay the way it is, even if it’s not perfect. The couple already have a 4-year-old daughter, Blue Ivy, who Jay-Z absolutely adores, and with another child on the way, that means the rapper won’t be going anywhere soon.

According to OK! Magazine, Beyonce was spotted covering up her stomach during a yacht date with Jay-Z and Blue Ivy. Beyonce apparently made quite an effort to hide her fuller figure from the paparazzi cameras while keeping her hands strategically placed near her midsection. Either the singer might have had a heavy meal or she’s definitely pregnant by just not ready to make an announcement just yet.

A Beyonce pregnancy would definitely cause a lot of frenzy in the media and, of course, make everyone forget about the Jay-Z cheating rumors and the ongoing trouble in their marriage. All eyes will definitely be on Beyonce’s baby bump with media reports on every move she makes.

With nothing planned in the coming months, now is the perfect time for Beyonce to enjoy her pregnancy and possibly mend things with Jay-Z for the sake of not only her image and her career, but her family, too. Beyonce and Jay-Z surely don’t want to bring another child in this world if they have a broken marriage.

Tell us CDL readers, do you think Beyonce’s pregnant? Will her second pregnancy help fix her marriage or make things worse between her and Jay-Z? Drop us a line below and of of course don’t forget to check back with CDL on all of the latest updates on Beyonce and Jay-Z and your favorite celebrities right here.