Big Brother 18 Battle Back Competition Results: Victor Heads Back Into The House, Prepares To Dominate Game! 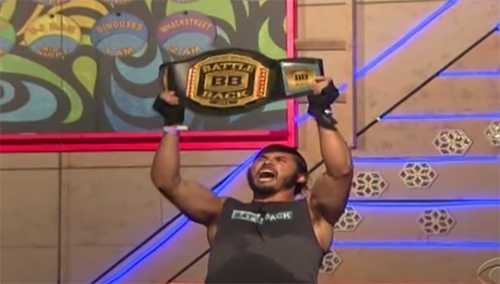 We now know the results of the Big Brother 18 Battle Back competition, which was televised for all to see on Friday, July 22nd. Victor managed to take home the win, which means he was granted passage back into the Big Brother 18 House. Victor is a beast when it comes to competitions and, while Tiffany probably gave him the biggest run for his money, nobody proved an appropriate match to challenge his Big Bro power.

For those who are unfamiliar with the Battle Back twist, it introduces a competition to the game where evicted houseguests – should they prove victorious – get to return to the BB18 House. The houseguests given the opportunity to compete in this Battle Back competition (in sequential order of their evictions) were Glenn, Jozea, Victor, Bronte, and Tiffany. Tiffany was eliminated last night on Thursday, July 21st after failing to sway people to vote out Mama Day. She gave it her best shot throughout the week but, alas, her efforts fell flat – as they did tonight.

All of the HGs were very surprised when Julie told them that one of the previously evicted contestants would be returning. The HGs were also a bit surprised to see Victor storm through the front door with his bags in hand – though, not sure why they were so surprised, seeing as how he’s one of the stronger individuals in the game.

During the airing of the Friday night show, viewers saw Paulie’s excited reaction: “Oh, I knew it!”

Additionally, Julie revealed to viewers and fans (not the HGs) that there’s a secret room in the BB18 House that can only be found by following a certain pattern of clues hidden around the house. She revealed that, should a houseguest stumble upon this room, an incredible power could be unleashed. This added element will be in play for 4 weeks.

What do you make of this Battle Back outcome? Furthermore, how do you think this recent development will shakeup the current game play and strategies being formulated?

Leave your thoughts in the comments section below and keep an eye out for our Big Brother 18 spoilers and news. We stay on top of all the BB18 spoilers so you know what’s happening when it matters most!