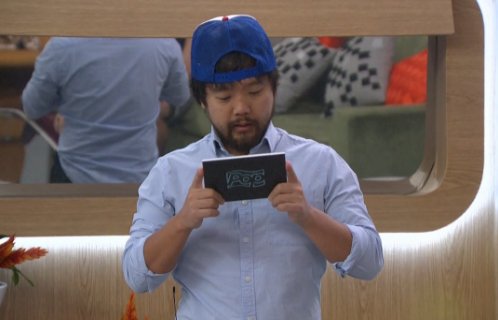 #BigBrother18 tonight starts with Paul, Nicole and James popping the champagne bottle to celebrate them making it to #BB18 Final 3. Paul is happy that Corey is gone since he was the biggest threat. Nicole says all the couples are broken up and she wants to win.

James thinks it was good to evict Corey to break up the power couple. They laugh about how the jury is wondering that the three of them made it to the end. Nicole sees that Corey forgot his pillow and she’s sad that he’s gone. Nicole bawls in the Diary Room.

Nicole says it’s scary without him and she misses Corey being there with him. She says she misses his smile. Nicole pouts in bed and says she’s so alone but then she knows she needs to try and be strong without him. James and Paul talk final 2.

Three final 2 deals are in play

Even before the LIVE eviction that sent Corey home, Paul and James make a final 2 deal. Later, Paul also makes a final 2 with Nicole. He shakes on it with both of them. Looks like he’s hedging his bets to give himself the best advantage.

But in Diary, Paul says he owes neither of them anything and that both have backstabbed them. He wants to use whoever he has to. James seems all-in on the final 2 deal with Paul. Nicole wonders if she should take Paul to final 2. Lots of deals are in play.

Next morning, there’s a fancy breakfast awaiting them and the table has been downsized to a tiny one. They sit down with mimosas to eat. They have fresh flowers along with the yummy eats. Now it’s memory time.

A walk down memory lane

Paul says he’s seen more tears in BB18 than he’s seen in his entire life. We see Michelle bawling and Frank comforting her. Then we see Tiffany crying to Natalie. Later, it’s Paulie crying over a butterfly. Tears, tears and more tears. Nicole is crying on the flashback too.

Corey laughs at her when she can’t stop crying. Paulie threatens the butterfly. Meech cries again and says she’s ugly and bawls out loud. Then we see Natalie crying about not winning the endurance comp against Victor. More Paulie, Tiffany and Meech crying.

We also see Meech crying after she hit Paul. James told Paulie the butterfly is gone and he needs to chill out. James says Paulie was the biggest breakdown. Paul says Paulie always talked about playing with no emotion and then he lost it.

James says Big Brother broke him. We see Paulie threatening Natalie with eviction. There’s the whole fake boobs thing and then Bridgette, Natalie and the other girls blowing up Paulie’s game. Paulie was off the rails and offended all the girls.

Then we saw Meech and Paulie laying into each other. She says he won’t win and that makes her happy. Later, Paulie said Meech is crying but she was really laughing at her and he continued his threats against her and called her a jealous child.

Meech said he blew up his whole game. Paulie was red-faced and off the rails. That was some of the best stuff in Big Brother 18. That whole thing led to Paulie’s butterfly tears.

Flashback to fun and friendship

James says he liked pranking everyone and we see James, Victor and Paul pummel Nicole with marshmallows in the Paris room. Then we see Frank tickling James’ ear while he slept. Then there’s the girls shaving creaming sleeping guys.lNicole and Corey tormented each other with shower antics and James threw ice water on Corey. James and Nicole coated Corey in baby powder. James says he hated when his Crocs went missing and Paul says that’s what you get for wearing Crocs.

They made a mystery montage out of James’ missing shoes. He scoured the house looking for them. He asked Natalie where his Crocs are. They were frozen in water in the freezer.

We see a montage of yawns, lack of answers, Paulie lying down, Paul farting and burping. Jozea burping. There’s a montage of complaints about Paul and is constant talking. Then we see the tears and people hiding and venting in there. Corey even cried.

Meech was openly bawling. Lots of #BBTears. Bridgette asked for tissues. Victor bawled. Da’Vonne cried. Is there anyone who didn’t cry? Meech hoped for a double eviction. It’s a montage of tears and snot.

Paul says he was in a bromance and they were in showmances. We see Victor and Paul bickering like an old married couple. Nicole and Corey laugh and Nicole asks how long they’ve been married and Paul says 20 years but it feels like longer.

Nicole says they are like an old couple. Victor nags Paul about his dishes, sweaty feet, and sloppiness. They bicker over cooking and Nicole says they’re hilarious as a couple. Nicole says their love for one another runs deep and Victor calls him his ride or die.

Victor says Paul has the cutest little butt and Nicole says she could watch them all day. James says Victor taught him Spanish to help talk with Natalie in her native tongue.

We see Victor giving James lessons to talk to Natalie and he asks how to say I love you. Natalie thinks it’s super cute to see James trying to learn Spanish for her. Then we see James and Natalie in Diary trying out Spanish. His is bad.

James tells Nicole he can teach her some Texas lingo to help her with Corey. Nicole talks about how good looking he is. We see her staring at him while he worked out. She watched Paulie and Corey work out together. Nicole says she and Corey still fought.

We see on day 82 that she got annoyed with Corey who lectured her and told her that her true colors are showing. She stalked off. Corey followed her and says he’s in the doghouse. She went to bed and cried and said he hurt her feelings.

A look at the wall of houseguests

They talk about the people that are black and white now and Paul says he doesn’t miss any of them. Paul says Bridgette was crazy because her best friend was a basil plant named Mr Jenkins. She says he’s all she has now that Frank is gone and hung out with him.

They talk about Big Meech being a grouchy cat. Paul says that’s not a cat he liked to have and they joke about her cat naps. Corey fed her milk every morning. Corey said she’s either hyper and jumping around or asleep all day. He called her a lazy cat.

Paul asks if anyone misses Meech and it’s crickets. Paul says he misses Victor and his big laugh. He says the fool was jolly. Meech and Nicole talked about how loud of a laugher he is and how strange it is. Corey imitated it. Nicole said it’s like a villain.

Then Paul says he was known for yelling at people all the time. We see Paul confronting James and Meech piled onto Paul and called him a baby. Paul went off on her and called her the c* word. He called her a bully and a terrible person.

When she stormed out, Paul went right back to talking about James. Natalie defended James against James’ accusations about putting certain people on the block. James told Paul that Natalie wanted Victor to stay. That set people off.

The Paul vs Meech thing spiraled into a breakup of the final four of Natalie, James, Corey and Nicole. There’s also a reminder to go to CBS.com to vote for America’s Favorite Houseguest.

A look back at the houseguests that went before them…

We see a quick look at all the BB18 houseguests that left the house and a brief bio of them and what they said about themselves and the game. This includes more Paulie, Tiffany and Big Meech tears plus all of Victor’s comebacks into the house.

We also see Pablo in the house and his untimely exit as Meech stole him on the way out. We see America’s Care Package and Corey’s sleep walking and talking about Harry Potter. The three talk about the summer and they agree the best man or woman will win.

Then we see the first part of the Final HoH. It’s a cat themed comp and they are all dressed as kitties. They have to chase a laser pointer, jump on string and hang. Nicole is excited to be part of the final 3. They take their spots as the Round 1 HoH comp kicks off.

Round 1 of 3 part Final HoH kicks off!

They chase the laser pointer all around. Then they get onto a wall and they all look silly in their kitty cat costumes. They all toss off their fake ears to get serious. Paul doesn’t trust either of them to take him so he wants to win. Next they’re soaked with sprays of cold water.

Once they cling to the wall for a few minutes being tormented by icy water, the laser pointer is active again and they have to hop down and give chase again. Looks like we won’t see the results on CBS until the next episode.

That’s it. We don’t see the winner of Round 1 winner of the 3-part HoH comp for the final HoH. If you want to know who won it, check out CDL’s Big Brother 18 Live Feed spoilers on who won the comp and will advance directly to Round 3 of the comps.