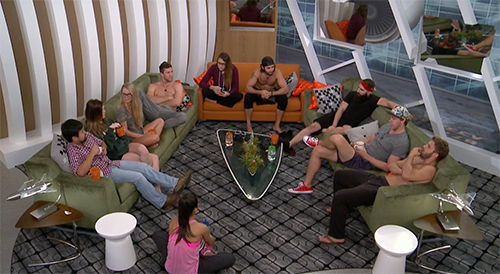 Big Brother 18 spoilers revealed that Paulie recently won the Power of Veto during the PoV competition, which fully opens the gates for him to carry out his grand plan to backdoor Victor. Paulie, current HOH, originally nominated Bronte and Paul. Now, however, he’ll have to remove one of his original nominees if he’s to see his plan to its end. Also on the block is Tiffany, who was the victim of the BB18 Roadkill, a power recently won by Victor.

Based on BB18 spoilers, Victor was not chosen to participate in the recent PoV competition, which completely nixed his chances of winning the PoV and protecting himself this week from being a REnom (should Paulie stick to his plan).

Is Victor’s fate sealed? Will he be the next HG evicted from the BB18 house? Or will some crazy twist save his rear? The gameplay in the house is definitely gearing up but, as of yet, there hasn’t been an incredible amount of drama – not the kind I look for anyway.

CDL will be doing daily recaps/highlights of what’s going on in the BB18 house, so be sure to keep refreshing the page to get all your Big Brother spoilers and updates as they happen live.

12:18 BBT – James talks with Paulie in the HOH room. James mentions that he’s planning on throwing the next HOH competition. As James begins to leave the room, Paulie mentions that he thinks there’s going to be another twist introduced in the near future. James agrees. Soon, he leaves to go get some breakfast.

12:21 BBT – the HGs are all working to get ready for the day, as they were all allowed to sleep in.

12:40 BBT – Paul and Paulie are talking about modeling.

12:53 BBT – Nicole and Tiffany are talking about education and the teachers who’ve impacted them throughout their lives.

1:05 BBT – Frank and Mama Day discuss gameplay. Frank suggests that if Bronte wins HOH next week that they set their sights on Tiffany. Frank also says that he won’t feel comfortable with some of the guys making it to the end with them, so they’ll also become their targets eventually.

3:35 BBT – Paulie and Tiffany are in bed in the HOH room. Tiffany wants to “review days.” They’re looking pretty snuggly and going back over all the competitions that have occurred thus far. Paulie is planning on removing Paul from the chopping block and putting up Victor in his place.