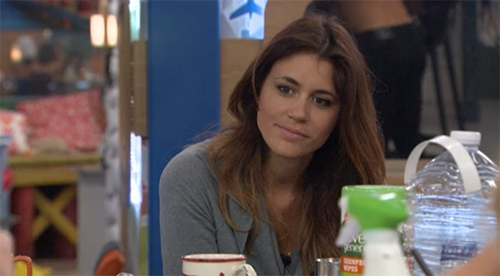 According to Big Brother 18 spoilers, Bridgette, the current HOH and winner of the Week 3 PoV, chose NOT to use the PoV. She kept her original nominations the same. In case you missed it, the current nominees at risk for eviction are Paul, Tiffany, and Bronte (Frank’s Roadkill nom).

After the ceremony took place, Bridgette and Bronte were talking about how surprised Tiffany looked that the PoV wasn’t used during the ceremony. They really enjoyed seeing her shocked, though Tiffany really shouldn’t have been so surprised by the outcome, as she was told this scenario would occur.

Up until recently, it was looking like Tiffany would be the HG walking out of the house come Thursday evening. Have the tides shifted in the house and has a target been placed on someone else’s back?

BB18 spoilers reveal that there has been some talk in the house about keeping Tiffany around and eliminating Bronte – because Tiffany would most likely align with house efforts to evict Frank in coming weeks. Bronte, perhaps, not so much. Last night, courtesy of the Live Feeds, we saw Corey and Nicole having a vote-flip talk. Unfortunately, just as Corey and Nicole’s talk was heating up, Tiffany walked in and they were quick to hush up. Whoops!

It looks like Tiffany has some work to do if she’s going to remain in the BB18 House – but, on the bright side for her, it doesn’t look like it’ll take a giant miracle for her to survive another week. Just some sweet talking, strategy, and that good ol’ Rousso manipulation magic.

What do you make of how the game is currently being played? Leave your thoughts in the comments section below and be sure to keep checking CDL for all your Big Brother spoilers, news, and updates!