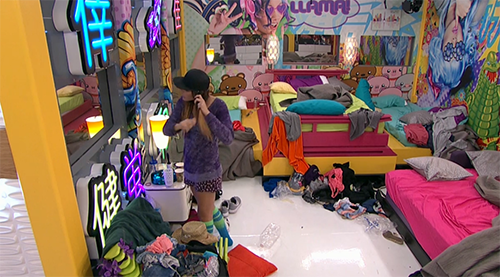 According to Big Brother 18 spoilers, the Power of Veto competition results are in – and the winner is Bridgette, who’s also the current HOH. In addition to Bridgette, Paul, Tiffany, Bronte (who was nominated recently as the Roadkill victim), Natalie, and Paulie competed in the PoV competition. It was an intense battle and, seeing as how Bridgette won the power, it’s looking like Tiffany will be a cooked goose – one headed out of the BB18 House come Thursday.

According to BB18 spoilers, there’s a chance that Bridgette will remove Bronte from the block – but there’s also the possibility that she’ll just leave nominations the same. No way will she use the power to remove Tiffany from the chopping block, since that was her (and Frank’s!) target this week.

What do you make of this current situation? Are you surprised that Bridgette came out on top and took the coveted PoV? The only way that Tiffany could’ve secured her safety this week would have been for her to win the PoV competition. The other players on the block don’t have much to worry about now that Tiffany remains. She’ll likely be going home.

We’re always geared up to expect the unexpected on Big Brother; however, so far in the game, the players have been fairly consistent with evicting the players they’ve set out to evict. The players are forming plans, and they’re sticking to those plans. While that’s commendable and shows strategy, it does lead to the drama getting a bit dry at times.

What do you think should happen in the coming days to REALLY spice up things in the house? Leave your thoughts in the comments section below, and keep checking CDL for all your Big Brother spoilers!