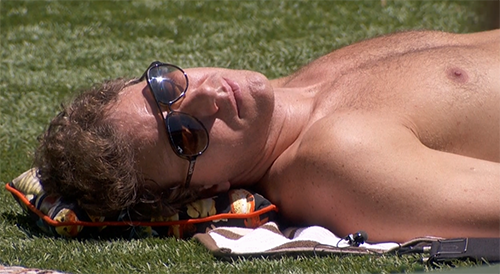 Big Brother 18 spoilers reveal that the Houseguests have just finished the Week 3 Roadkill competition, which led to a victory for Frank. This means that he has even MORE control this week than he did before, and it will be interesting to see who he adds to the chopping block.

Currently on the block are Tiffany and Paul. Both players know the feeling of being up on the block and, if Frank gets his way, then Tiffany will be the firecracker walking through the door come eviction day. Bridgette is the current HOH but that doesn’t mean she’s in total control of the game.

Right now, Frank has asserted the role of puppet master. Corey and Paulie even made the claim that Frank threw the HOH competition because he knew full well that he’d be able to manipulate Bridgette into doing his bidding. If this is truly the case, then good for Frank. What a move.

The competition took about 5 hours. According to BB18 spoilers, Paul and Tiffany were in a panic talking in the storage room. Tiffany had a sneaking suspicion that Frank had won. Not long after, we all saw Frank confirm his win to Nicole and Corey. Oh, boy. Who will he nominate?

What do you think of the current gameplay so far? Is the drama high enough for you? Are the stakes big enough for you? Feel free to leave your thoughts in the comments section below, and don’t forget to keep checking CDL for all your Big Brother spoilers, updates, and news.