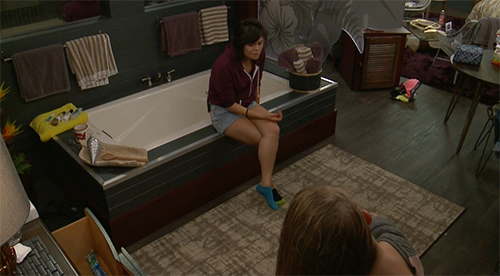 According to Big Brother 18 spoilers, Frank, who recently won the Roadkill competition, chose to throw up Bronte. Things are heating up in the house, especially after the eviction of Victor and the crowning of Bridgette as Week 3 HOH. As we now know, thanks to BB18 spoilers, Bridgette chose to put up Tiffany and Paul on the chopping block. Paul might as well post his address on the hot seat seeing as how this is already his third time on the block.

While Bridgette did announce her nominations, it’s clear that she’s not acting alone. Frank was the mastermind behind this move and he’s playing the role of puppet master quite well. Corey and Paulie suspected that Frank may have even thrown the competition to Bridgette, knowing full well that he’d be able to orchestrate her ultimate decisions without getting any blood on his hands. If there’s one thing we’ve learned from watching BB year after year, it’s that it’s best to limit the blood on your hands whenever possible.

Frank is safe from nominations this week, but he definitely has a target on his back, and Week 4 might very well spell a different set of circumstances for the Good Ol’ Frank. Do you think the target on his back is growing? What do you think about Paul, Tiffany, and now Bronte being up on the block? Leave your thoughts in the comments section below.