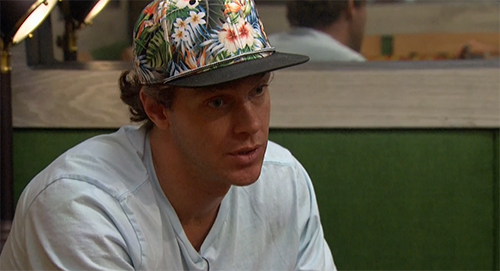 Big Brother 18 spoilers indicate that the Week 5 HoH has been chosen, and it’s none other than James! James won the coveted title after beating everyone in an endurance comp, one of his known specialities. The game was supposedly a wall-hanging style competition – and James’s physical and mental strength took him all the way.

Additionally, he nominated Bridgette and Frank. These two are now on the chopping block. Supposedly, everyone in the house wants Frank gone, gone, gone. If things continue playing out how they are, then there’s a good chance that he’ll be packing his bags. Now that the Roadkill has been removed from the BB18 game, there will only be two nominees this week.

Frank has finally begun to understand that the entire house wants him outta there, but he still might be able to conjure up some type of social game/strategy to rally some support to keep him around another week. What do you think, BB fans? Will Frank be able to keep himself safe?

As always, we’re to expect the unexpected on Big Brother. During Friday night’s telecast, Julie revealed yet another twist – and, should Frank be able to access this power, who knows what could be in store for his game.

Julie revealed to viewers and fans (not the HGs) that there’s a secret room in the BB18 House that can only be found by following a certain pattern of clues. She revealed that, should a houseguest stumble upon this room, an incredible power could be unleashed. This added element will be in play for 4 weeks.

BB18 spoilers should reveal the winner of the Week 5 Power of Veto competition sometime Saturday, so we will be sure to clue you into the details once those become available. Keep checking CDL for all your Big Brother spoilers, updates, and news.