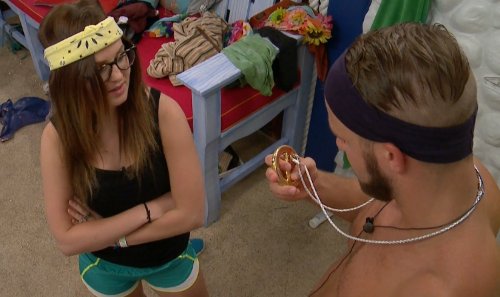 According to Big Brother 18 spoilers, Paulie won the Week 6 Power of Veto. The PoV ceremony will come later, but it looks like Paulie will come off the chopping block and Paul will have to choose a renom.

There is a slim chance Paulie could use the PoV on Bridgette to ensure she stays in and Day goes home, but that’s a risky proposition. The plan to backdoor Da’Vonne should go into play – so long as Paul doesn’t go rogue against his Bro Alliance.

It was early on Saturday when the Week 6 PoV player selection took place. Paul as HoH plus Bridgette and Paulie as the noms all chose discs. Paulie got to choose a player and he chose Victor. Corey and Natalie were also picked to play. Then the PoV comp played out Saturday and wrapped in early afternoon.

With Paul, Bridgette, Paulie, Victor, Corey and Natalie playing, and Nicole hosting, we saw from the Live Feeds that it was Paulie that emerged as the Week 6 Power of Veto comp winner.

PoV scheming before the comp

There was some scheming between the Week 6 nomination ceremony and the PoV draw. Paul apparently made a pretty rough speech about why he was nominating Bridgette but then he pulled her aside later and told her that she’s not the target.

Paul explains that she and Paulie are both pawns and the real target is Da’Vonne and she shouldn’t worry. Too late. Bridgette is worried and told the cameras that she has to win PoV and pull herself down off the block. That’s a good idea since Paul could be fibbing about backdooring Day.

Also after the PoV player draw, James was upset that Paulie chose Victor to play instead of him. Going into the comp, Paul told everyone that he was on board with targeting Da’Vonne for a back door even though he nominated Bridgette and seemed dead set on targeting her.

Paulie wins PoV, will he save himself?

Big Brother 18 spoilers from the Live Feeds show that the comp was played Saturday afternoon and the big winner is Paulie. The houseguests that played in the challenge came back inside dressed in what looks like road race apparel with numbers on their backs and tank tops.

Paulie has had it with Zakiyah after two solid days of fighting. She’s acting jealous and focused obsessively on their showmance. But Paulie is in the BB18 house to play a game and is focused on winning it. Z is tanking her game and now Paulie wants her out.

Scheming after the PoV comp

After the PoV comp, Natalie and James went into the Paris room to do a post-mortem and they discussed how Paulie wants to keep Bridgette around because if he saves her, she’ll do his dirty work and he won’t get blood on his hands.

Natalie and James are worried that Paulie is being handed the BB18 victory – and their insight seems spot-on based on what’s going on. If Paulie doesn’t use the veto on himself, we could see James lobby to take him out since he’s such a strong player.

Don’t forget that America’s Care Package twist is in play and, although the BB18 HGs don’t know it, the next advantage is the ability to eliminate two eviction votes, but since the first care package was awarded on a Friday, it looks like the vote elimination would apply to Week 7 eviction vote and NOT to Week 6.

What do you think BB18 fans? Is it time for Da’Vonne to go? Will Paul go after her as he‘s promised or double deal his allies? Who do you want to see as the final two on the chopping block come eviction night? Share your comments below on all the Big Brother action.

Check back often with CDL for more Big Brother 18 spoilers and news plus the Veto Meeting results from the Live Feeds.