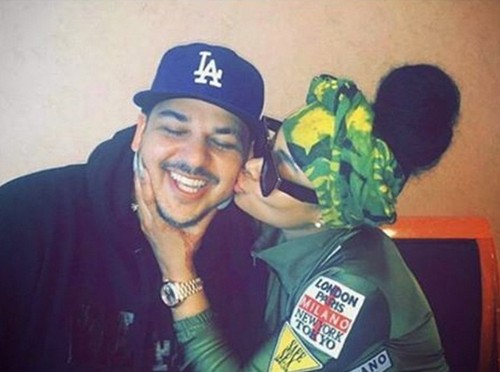 Chyna was dating Tyga just over a year when the singer gave birth to the rapper’s son King Cairo. Sadly, the relationship ended in 2014 – because Kylie Jenner seduced Tyga away from Chyna. Blac Chyna lost to Kylie Jenner in the battle of the famewhores.

Chyna is already getting a boatload of child support from Tyga, but that gravy train isn’t going to last forever. But a baby with Rob could bring a never ending stream of dollars rolling in. Would Kris Jenner dare to allow any of her grandbabies to be seen without the latest and hottest fashion? And of course Aunties Kourtney, Khloe and Kim Kardashian would generously dote upon their little niece or nephew.

You better believe Kris Jenner would find a way to make money, perhaps granting permission for Rob and Chyna to have their own reality show. That’s what the couple wants after all, isn’t it? Chyna’s going to get her piece of that pie one way or the other.

No one is saying for sure Blac Chyna is pregnant! But Rob Kardashian moved pretty fast all over that, didn’t he? Basically the duo was living together immediately and then Rob drove all the way from Los Angeles to Texas and then BACK to Los Angeles after Chyna was arrested for bad behavior and drug possession.

In addition, there’s buzz that Chyna and Rob are engaged. And it seems Khloe Kardashian is trying to repair her relationship with her younger brother. Now, Kylie Jenner, on the other hand, may never speak to Rob again. Does it really matter? Kylie and Rob haven’t acknowledged each other in forever.