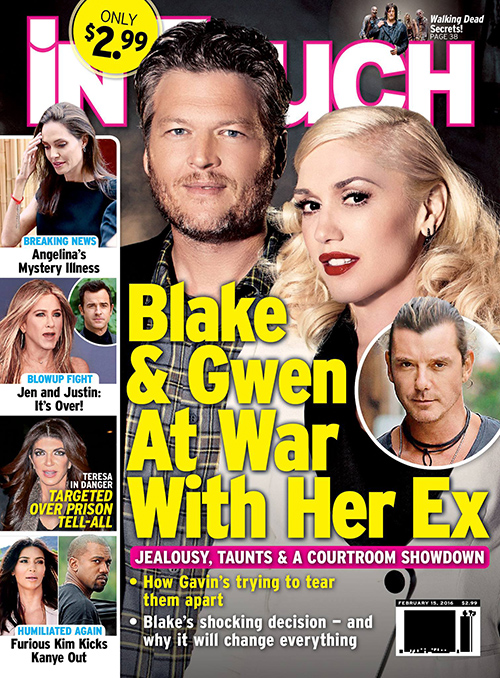 Are Blake Shelton and Gwen Stefani calling it quits because of Gavin Rossdale? Are Gwen and Gavin fighting over custody of the couple’s three boys? Has Shelton had enough of Rossdale’s ridiculous demands and throwing in the towel?

Gavin and Gwen have been involved in some sort of “courtroom showdown.” Apparently, Rossdale is a jealous mess. And something Gwen’s former husband has done has pushed Blake to make a decision that will be a game-changer – if the latest cover of In Touch is to be believed.

Gwen and Blake have been nearly inseparable since going public with their relationship in October 2015. “The Voice” coaches Facetimed at Thanksgiving, then spent time together at Blake’s Oklahoma mansion for Christmas and New Year’s. As previously reported, Stefani is remodeling Shelton’s home and making it more to her liking. Many believe Gwen has been busy decorating three bedrooms for the boys at Blake’s place.

Is it possible that Gavin isn’t pushing Gwen and Blake apart, but causing the couple to bond even more? Could Gavin Rossdale have become so unreasonable that Blake Shelton is ready to marry Gwen Stefani and move Kingston, Zuma, and Apollo far away from Hollywood? What if Gwen wants Blake to adopt the boys and shut Gavin out completely?

This supposed life-changing choice Blake has made could be that the superstar is giving up on country music and going mainstream. After being snubbed by the Academy of Country Music, Shelton received zero ACM nominations. The “Sangria” singer might be ready for a change. There’s a lot of buzz that Blake’s relationship with Gwen is the reason Shelton isn’t nominated for any ACM awards this year.

What is Gavin Rossdale mad at Gwen Stefani about now? Is it because Gwen moved on so quickly with Blake Shelton? Doesn’t Rossdale want Stefani to be happy? Gavin is reportedly back with the Mindy Mann. In case you missed it, that’s the nanny who allegedly had an affair with Gavin that broke up his 13-year marriage to Gwen.