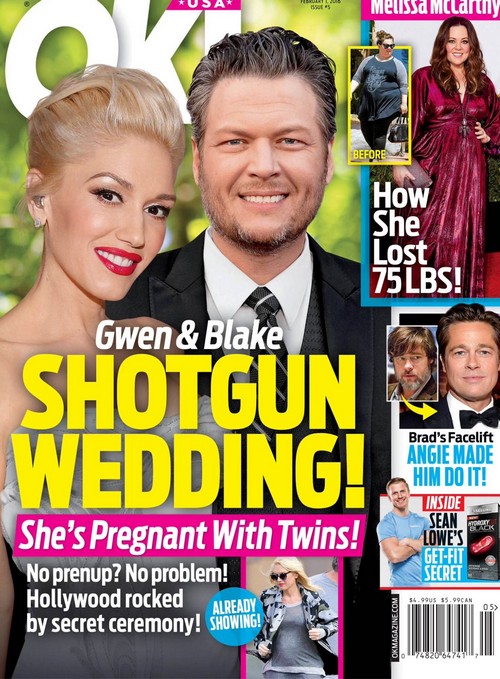 Is Gwen Stefani pregnant and planning a spring wedding to Blake Shelton in Oklahoma? There’s a possibility the couple is rushing to the altar before the Shelton babies arrive. There probably will be dozens of denials before the Blake and Gwen publicly share the baby news. After all, “The Voice” coaches kept their relationship secret for months.

Even after Stefani and Shelton were photographed leaving a Halloween party together and the denials kept coming. “We’re just friends” the duo claimed!

On the night of the Country Music Association Awards in November 2015 both Blake and Gwen’s reps issued statements the couple was indeed dating. It’s obvious Stefani and Shelton like to keep things hush-hush, right?

Recently an insider divulged to OK! That Gwen is indeed pregnant with twins. The source went on to say that Gwen “grew up a good Catholic girl” and it’s very important to Stefani that she and Blake are legally wed before the little ones arrive. And apparently Gwen Stefani is in such a hurry to marry Blake Shelton that a good ole down-home country wedding at Shelton’s Oklahoma estate will have to do.

There won’t be a Dior dress or wedding receptions in London AND New York this time around for Gwen. A source revealed that Shelton and Stefani will exchange wedding vows in a quiet setting under a gazebo overlooking a beautiful lake. It’s going to be a super relaxed and casual affair, probably more “beer and barbecue than champagne and caviar” the insider revealed.

Apparently Gwen and Blake are going to make the country music megastar’s place in Oklahoma their base of operation – and Gwen’s kiddos will live with mom and stepdad Blake away from the prying eyes of Hollywood. A friend close to the couple revealed that Gwen and Blake aren’t taking any chances!

Both know that there are way too many temptations in Hollywood that will totally wreck a marriage. Shelton and Stefani are “willing to do whatever it takes to make sure [a divorce] doesn’t happen to them.”

What about a prenup? Both Gwen Stefani and Blake Shelton have a whole lotta assets, have built businesses and have huge bank accounts. You would think Gwen and Blake would like to protect those, right? The insider divulged that soon-to-be super couple is completely optimistic that they’ll be happily married forever and a prenup is NOT necessary.

Two babies on the way, a spring wedding, moving to Oklahoma full-time, blending families. When will Blake and Gwen have time for “The Voice” and their recording careers? Those will be put on hold for a bit if the source is to be believed. Shelton and Stefani just want to focus on their new family for now.