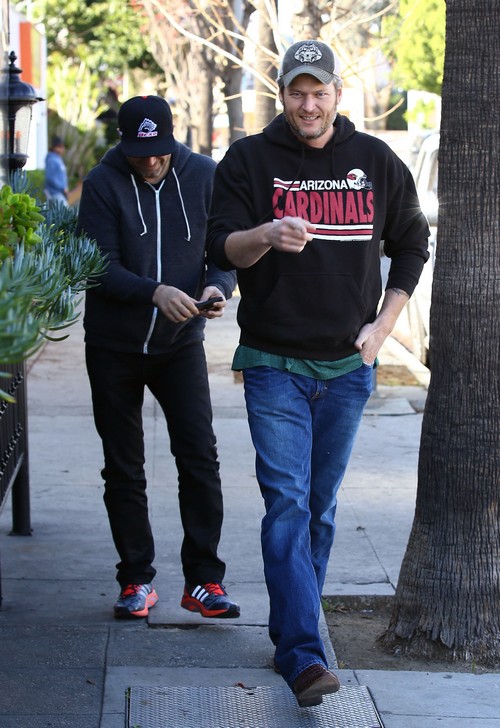 The official list of ACM nominees for 2016 was recently released. Blake’s ex-wife Miranda Lambert scored three nominations. Miranda is up for Entertainer of the Year, along with country music powerhouses Garth Brooks, Luke Bryan, Eric Church and Luke Bryan.

Was Blake overlooked because he spent too much time focused on Gwen and not enough time on music? The only new single Blake released to radio in 2015 was “Sangria” – which did hit number one on the country music charts. So, what happened? Why no Academy of Country Music nomination for Male Vocalist of the Year, Record of the Year or Single of the Year for Blake?

It’s entirely possible fans have taken Lambert’s side in this whole Blake vs. Miranda battle of the new love interests. At first things were pretty cool between Shelton and Lambert. Both said the split was amicable, the country music couple just went down to the courthouse, signed some papers and poof – Blake and Miranda were divorced.

Then the music industry started buzzing that Blake was dating “The Voice” co-coach Gwen – and that the duo had been fooling around before either was divorced. Actually, there was a lot of talk that Blake cheated on Miranda with Gwen Stefani. Or it might have been Gwen was cheating on Gavin Rossdale with Blake Shelton. Either way, speculation was that cheating took place.

Was the final straw the night before the Country Music Awards in October 2015? That was the night Blake and Gwen went public with their romance.

The announcement about Blake and Gwen allegedly ruined Miranda Lambert’s big night – despite the fact that the “Little Red Wagon” singer took home the CMA for Female Vocalist of the Year. Blake didn’t take home a CMA – but the “Some Beach” singer did take home Gwen.

Did the Academy of Country Music snub Blake Shelton because he flaunted his romance with Gwen Stefani – or because Blake hooked-up with Gwen much too soon after the Lambert-Shelton divorce?

Never fear! There’s a chance Blake may take home a Grammy for Best Country Duo/Group Performance. “Lonely Tonight” featuring Ashley Moore is nominated in that category. But the favorite to win that Grammy is Joey + Rory’s “If I Needed You” with a close second on Little Big Town’s “Girl Crush.”

Blake Shelton is spotted getting lunch with a friend in Studio City, California on January 20, 2015. FameFlynet