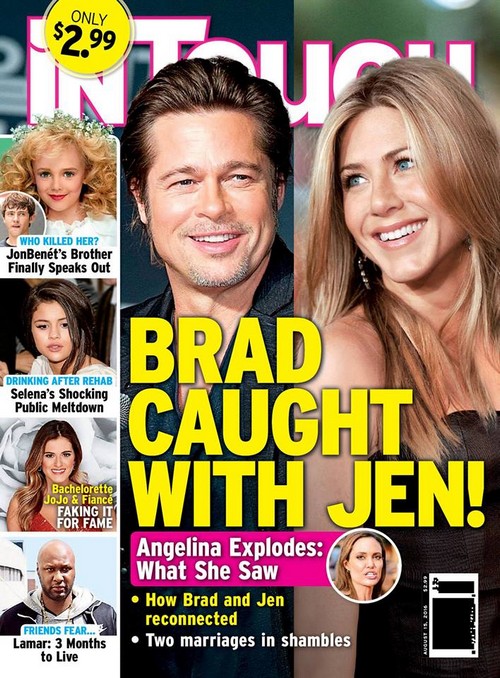 Despite Jennifer Aniston only being married to Justin Theroux since August 2015, the actress is constantly thrusting herself into the middle of the old love triangle between herself, Angelina Jolie and ex Brad Pitt. Perhaps the two are doomed to an “the grass is always greener on the other side” outlook on love.

JonBenet Ramsey’s brother, Burke Ramsey, is breaking his silence twenty years after his sister’s death, according to the cover of InTouch Weekly. In an exclusive three-part interview on Dr. Phil, Burke Ramsey will reveal shocking new details as well as his personal struggles after the tragic murder of six-year-old JonBenet Ramsey in 1996.

Burke Ramsey was exonerated of any involvement in the crime by DNA evidence in 2003. John and Patsy Ramsey, parents of both JonBenet and Burke, were long suspected by police and the public of being involved in the murder of their child but were cleared by police in 2008. The interview will air on September 12.

Selena Gomez’s descent into drugs and alcohol continues shortly after leaving rehab, InTouch Weekly sources state. The singer checked into rehab after canceling her tour due to exhaustion, but then left rehab early because she felt “cured.”

Since leaving rehab, Selena Gomez is up to her old tricks, becoming intoxicated in public and seen partying with Jared Leto, who has had his own problems with drugs and alcohol over the years. Her alcohol relapse may have been triggered by recent reports that her on-again off-again relationship with Justin Bieber is over.

Speaking of drug and alcohol abuse, it looks like Selena Gomez isn’t the only one struggling: Lamar Odom reportedly only has three months to live, according to the cover of InTouch Weekly. The athlete has been on a downward spiral for some time, causing irreparable damage to his health, annihilating his basketball career and destroying his marriage to Khloe Kardashian.

Despite the laundry list of negative consequences of his actions, Lamar Odom refuses to accept help, even reportedly storming out of his recent intervention by friends and family. His loved ones fear that unless Lamar makes major life changes soon, he will only live for a few more months, given the extensive damage to his body that occurred after a near-fatal overdose in October 2015.

America’s current favorite couple, JoJo Fletcher and Jordan Rodgers, are faking their romance for fame. The claim comes from InTouch Weekly mere days after the two lovebirds from The Bachelorette announced their engagement. Jordan Rodgers has been accused of only competing on the show for fame and even dating other women.

Do you think the Brad Pitt, Angelina Jolie and Jennifer Aniston love triangle still exists? Will Burke Ramsey possibly implicate his parents in the death of JonBenet? Is there any hope that Selena Gomez or Lamar Odom will stop their dangerous behavior and seek help? Are JoJo and Jordan faking their romance for fame? Let us know what you think!