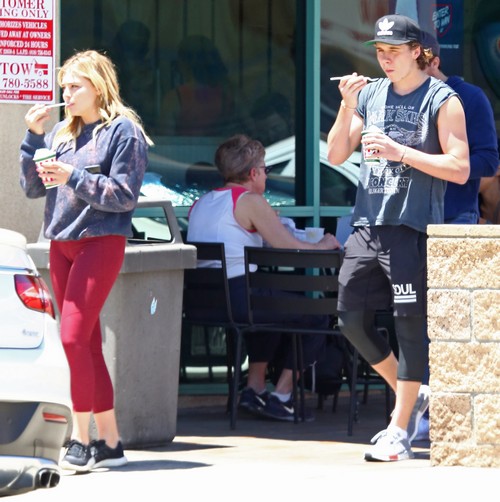 Brooklyn Beckham and Chloe Grace Moretz’s relationship has been drama free up to this point, but it looks like things are about to change for these two. In fact, there’s speculation that David Beckham and Victoria Beckham’s son might have just inserted himself into the Taylor Swift, Kim Kardashian and Kanye West feud.

Brooklyn Beckham might be the child of one of the world’s most talked about celebrity couples, but so far he’s managed to keep away the kind of drama that has gotten a lot of young Hollywood stars in big trouble. Yet, it looks like when it comes to defending his girlfriend, he’s willing to stand up for her, even if that means he’ll be making a few celebrity enemies in the process.

Last week Chloe Grace Moretz got involved in the Taylor Swift and Kanye West feud after Kim Kardashian’s leaked tapes proved that the chart topper isn’t always the victim she portrays herself out to be. The 19-year-old actress commented on the drama by saying, “Everyone in this industry needs to get their heads out of a hole and look around to realize what’s ACTUALLY happening in the REAL world.”

That’s when Kim Kardashian’s sister Khloe Kardashian clapped back at the actress with a NSFW photo and caption that read, “It this the a hole you’re referring to @CloeGMoretz?” She added a photo of an unidentified woman, who Khloe Kardashian assumed to be Chloe Grace Moretz, with her backside fully exposed.

And yet, Brooklyn Beckham just added his two cents by uploading a new photo of him and his girlfriend with the caption, “I think I’ll keep her” along with a red heart. Clearly, Brooklyn Beckham and Chloe Grace Moretz’s relationship is still as strong as ever, despite all of the nasty attacks from the Kardashian family.

In all honesty, Brooklyn Beckham and Chloe Grace Moretz have managed to stay classy with their retorts to all of the Taylor Swift and Kanye West drama, along with the mean-spirited and completely unwarranted social media attacks from the Kardashian family.

But knowing how much the Kardashians love to defend their family name and honor, it will only be a matter of time before Khloe Kardashian and her sisters start going after Brooklyn Beckham. But if there’s one family you don’t want to mess with in the entertainment world, it’s definitely the Kardashians.

Brooklyn Beckham might easily become a target to the Kardashian’s ridicule, just because he’s Chloe Grace Moretz’s girlfriend, and that’s something David Beckham and Victoria Beckham definitely don’t want. I mean, no one knows what kind of damage might come if the Kardashians go after the Beckham brand. What do you think, CDL readers?