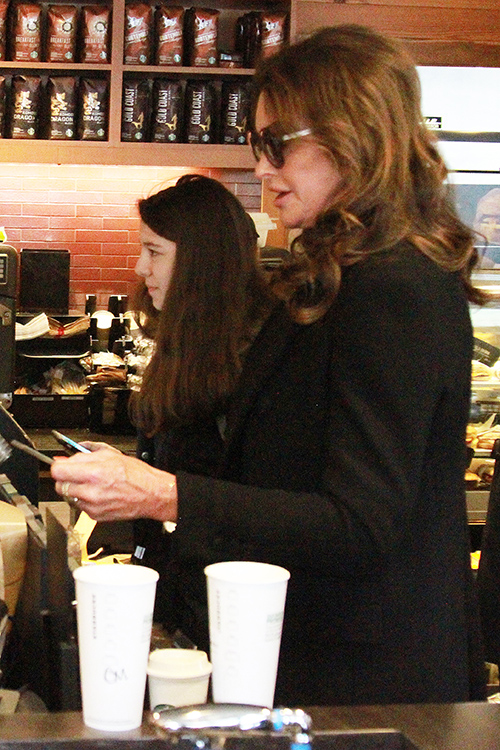 Caitlyn Jenner was spotted out and about in New York City on February 10. The reality star was grabbing a cup of coffee at Starbucks to get a kickstart for the day. Caitlyn Jenner has been spending time with daughter Kylie Jenner by taking part of her SnapChat video movie series. Let’s just say things got really weird when we saw Caitlyn Jenner in Harry Hudson’s bed – sans Harry Hudson, thank goodness. Kylie Jenner, where are you going with all of this?

We haven’t seen much of Caitlyn Jenner lately. Perhaps that’s largely due to the fact that all eyes are on the show, The People v O.J. Simpson. At this point, the show isn’t exactly focusing on Bruce Jenner, but more on Kris Jenner and her perspective on O.J. Simpson allegedly murdering Nicole Brown Simpson.

Speaking of O.J. Simpson, Radar Online reports that Mike Gilbert, who was O.J. Simpson’s former agent, revealed that OJ Simpson was no fan of Bruce Jenner. Gilbert told Radar, “OJ always thought Bruce was weird and he never fit in.” He continued, ”O.J. hated Bruce. He thought he was really awkward.”

Now here’s where it gets really um, errrr, interesting. Mike Gilbert talked to Radar about a day back in the 80s when he and O.J. were driving down Sunset Blvd. and spotted Bruce Jenner going the other way. O.J. Simpson then commented, “This mother****** wants to be a woman. OJ was looking straight at him and said ‘I swear to God now look at him. You heed my words. That mother****** wants to be a woman.” It seems as if OJ’s prophecy came true, if he did in fact say this.

Share your thoughts in the comments below and be sure to check back here at CDL for all the latest news on your favorite celebrities.