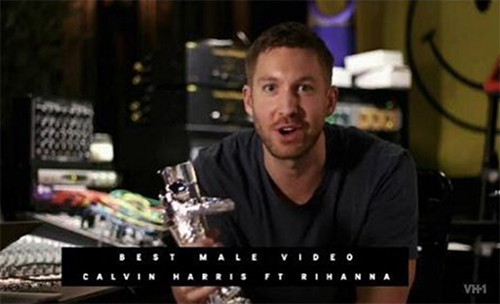 The Calvin Harris and Taylor Swift feud that surprised fans earlier this summer is definitely not over yet. Calvin Harris took the opportunity to shade his ex-girlfriend Taylor Swift while accepting his MTV VMA Award for ‘This Is What You Came For” during his speech on Sunday night.

Calvin Harris and Taylor Swift’s feud began over the songwriting credits to his smash summer hit, “This Is What You Came For.” Taylor Swift claimed that Calvin Harris failed to give her the recognition she deserves for writing the lyrics to his hit song.

Calvin Harris on the other hand claimed that both he and Taylor Swift agreed that it would be best to keep her involvement in the song a secret as their collaboration would end up taking away attention from the song itself. After all, Taylor Swift and Calvin Harris were the celebrity world’s golden couple during their 15 month relationship and rumors of them working together would have brought them more criticism than anything else.

Yet, PR-savvy Taylor Swift tried to throw her ex-boyfriend under the bus in a series of messages suggesting that he did her wrong by not giving her the acknowledgment she deserved on the song. Calvin Harris defended himself, calling out Taylor Swift on her victim-blaming ways and vowed to not allow Taylor Swift to get the best of him.

And now Calvin Harris’ sweet revenge came when he made no mention of Taylor Swift during his acceptance speech for ‘This Is What You Came For’ at the VMAs. Calvin Harris thanked Rihanna, who sang the lyrics on the song, the music video’s director, MTV, and his fans while adding, “This is for all of you who have supported the video. I love you. This is amazing. Thank you MTV.”

Even though many critics think that Calvin Harris could have been a “bigger man” by giving Taylor Swift some sort of shout out during his pre-taped speech, there’s a good chance that the singer will seek her own revenge in her next studio offering. Of course, no Taylor Swift album would be complete without at least one dig made at one of her ex-boyfriends for doing her wrong. After all, a Taylor Swift boyfriend diss track has become her signature style.

Do you think Calvin Harris should have thanked Taylor Swift during his MTV VMA acceptance speech for ‘This Is What You Came For?” Drop us a line with your thoughts below.