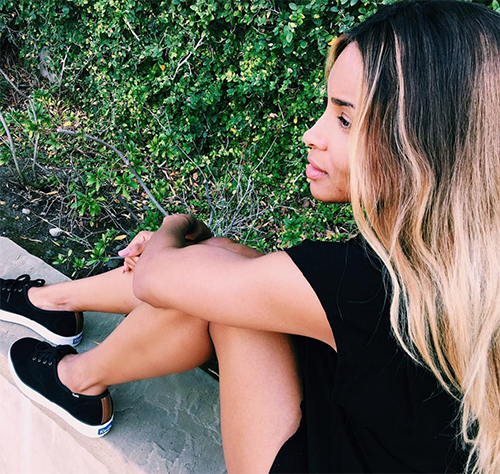 Is Ciara hiding a baby bump? Is the singer and her new husband, Russell Wilson, expecting their first child together? That’s what fans can’t help but wonder as there’s new speculation that the ‘I Bet’ singer and the Seattle Superhawks quarterback are no doubt working fast on starting a family after their summer wedding.

Ciara and Russell Wilson have made it no secret that they are enjoying their post-marital sex life now that they have made things official. Even though the singer went through several rocky relationships in the past – including her nasty fallout with her ex-fiance and baby daddy Future – she and Russell vowed to remain abstinent before they got married. Yet the moment they said their ‘I Dos,’ both Ciara and Russell took to their social media accounts just to tell their followers that they have indeed consummated their marriage.

Ciara already has a 2-year-old son, Future Zahir Wilburn, with her ex, who Russell treats as his own child. The NFL star is enjoying his daddy duties so much that he’s even posted photos of Future Zahir on his Instagram account, showing the world – and even the young tot’s biological father – just how much he means to him. So it’s no wonder that fans are already wondering if Ciara is pregnant with their first child as the timing is almost perfect for them.

Russell even told E! News about the couple’s baby plans, “Down the road, I would obviously [want kids]. She does too and hopefully, god willing, as long as they’re healthy, that’s what we pray for and whether it’s a boy or girl, who knows but we’ve got some time for that.”

In fact, many followers have even noticed that Ciara has strategically hidden her midsection in almost all of her most recent Instagram photos. Is the singer waiting for the right moment to make her pregnancy announcement? Are Ciara and Russell Wilson going to have a New Year’s baby? While the singer herself has made no comments on the speculation, it wouldn’t be surprising if she did end up showing off her baby bump by the end of the year.

Do you think Ciara is hiding a pregnancy? Let us know what you think. Also, don’t forget to check back with CDL for all the latest updates and news on Ciara and Russell Wilson along with all of your favorite celebrity couples here!

I love singing this song with him:) So Clean Clean 🔈☺️🔈❤️

Crushin On Him. Date Night 😍