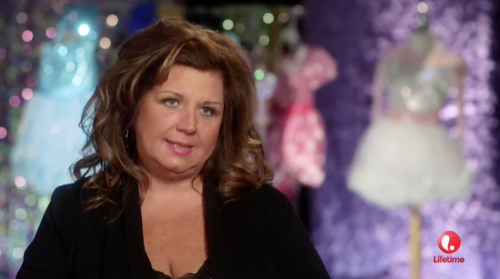 On the last episode Maddie’s nominated for a People’s Choice Award, leading the media to speculate if she’s leaving the ALDC. Later, the moms were furious with Abby when she takes an unexpected date to the ceremony; and a new mini’s attitude caused a dance disaster. Did you watch the episode? If you missed it, we have a full and detailed recap right here for you.

On tonight’s episode as per the Lifetime synopsis, “enhanced episode includes additional footage. Maddie’s nominated for a People’s Choice Award, leading to rumors; the moms are furious with Abby when she takes an unexpected date to the ceremony; and a new mini’s attitude causes a dance disaster.”

Tonight’s episode is going to be another drama packed evening, which you won’t want to miss. So be sure to tune in for our live coverage of Lifetime’s Dance Mom’s season 6 episode 12– tonight at 9 PM EST! While you wait for our recap, hit the comments and let us know how excited you are about this new episode of Dance Moms tonight!

#DanceMoms starts at ALDC with them asking where Kalani is. She’s there and so is Kira. Kira has been at home with her newborn and Melissa has been taking care of Kalani for her. She says she’s there for Kalani and will play nice and avoid the mama drama.

Jessa asks if the ultimatum over Ashlee is done. Kira says it’s a revolving door and then Abby comes out with a baby gift for Kira and asks about the ultimatum. Jill says she wants Kira there to put Ashlee in her place and says she’s a bully.

Jill says Kira hasn’t liked Ashlee for years. Abby congratulates the girls for the group win. She starts at the top of the pyramid with Maddie and says she won her solo and it was exquisite. Beside her is Mackenzie and says she was the overall scholarship winner back in Pittsburgh and beat 200 kids.

Next is four across – Nia, Kendall, Kalani and Brynn. Abby says they all did well. At the bottom is JoJo and Abby says she needs to stretch her legs straighter and work on her flexibility. They will have two trios competing against each other this week.

Abby says Brynn is a team captain for a trio and so is Maddie. Melissa thinks it’s strange that Brynn was chosen and speaks up. Jill asks how she came up with the captains. Abby says winning solos and says the moms are just ready to pounce on Brynn and Ashlee isn’t trying to get along with the moms.

Abby tells Brynn to choose. She goes with Kalani. Maddie takes Kendall. Brynn takes Mackenzie. Maddie takes JoJo. Holly says Nia is always left out. Ashlee asks if Brynn’s trio does well can they get an answer and Abby says if her trio wins, she will be on the team.

Holly thinks this whole thing doesn’t seem clearly planned and is more about the commercial than the group dance. Abby says a guest is coming in to direct the commercial and Todrick bounces in the door. The girls cheer and Melissa says they love him.

Todrick asks to be on the pyramid and Abby asks if he has his mom with him. The group routine is inspired by the Wizard of Oz and the commercial is too. She says it’s ease on down Santa Monica Bldv and the girls also get to sing in the ad.

Jill says it’s a great idea but Abby isn’t very collaborative. Jill says Abby is a one woman show and she hopes she won’t burn any bridges with Todrick. Brynn’s trio is contemporary with some acrobatics. Maddie has a contemporary jazz for her trio.

Brynn’s trio rehearsal starts first. Melissa says trios are the hardest to choreograph and says this week will be tough. Jill says she knew Brynn would pick Kalani because she wants to win. Jill says Brynn can put Kira and Ashlee’s differences aside to pick her.

Jill says if Kira really wants Brynn gone, talk to Kalani. It’s two days before competition and Abby is working with Maddie’s trio. She tells them tomorrow is the commercial so they need to nail this today. Jill says it’s a lot on their plate.

Nia and Holly show up and Maddie asks if Nia is okay. She says she is. The mom asks how Holly handled it. Holly says it’s hard to see someone new get something Nia didn’t get and Ashlee says it was because Brynn scored high in her solo. Holly says it’s not right.

Abby pulls Nia to work on her vocal for the commercial. Nia wants to be in the ad but says Abby isn’t that supportive of her and says Abby could have done two trios and a solo so no one was left out. Todrick says Abby can be a hater and Nia should remind her.

Abby hands Melissa a paper and says she’s leaving early to do some stuff. Abby says the group dance is on the back burner and says they can focus on the group Saturday when they get there or late Friday. Jessa says she doesn’t see how they will get it all done.

Holly sees that Abby is taking Melissa out early to go shopping for the shoot. Jill asks why now and Jessa says Abby wants to do as little work as possible and make the most money. Jill tells Kira that she also took advantage of Melissa by leaving Kalani with her for three months.

Kira says the moms are stirring up trouble and Jessa says Melissa was being nice to her but it was just stressing her out. Jessa says Melissa didn’t want to do it but was stuck. Jessa calls Kira super arrogant. Kira says she’s trying to blame her child. Holly piles on.

Brynn is nervous and hopes she wins so she doesn’t let Abby down. Kira cries and Holly says maybe it’s the pressure of being back. Kira says she knew it was going to be difficult. Jessa is pissed off at Kira but is willing to let it guy because she’s bawling like an after-school special.

She doesn’t want Kira’s meltdown to blow up their busy week. It’s the day of the commercial shoot. It’s a webmercial and Todrick is there and the shooting starts. Todrick is playing Dorothy. Nia is the lion. Brynn is the scarecrow, Kalani is the good witch.

Maddie is the wizard. Kendall is the wicked witch. Mackenzie is Toto the dog. Abby starts to take over and Melissa says she’s trying to direct. Holly tells Abby to quit yelling as she screams at the moms to move. Todrick ask Nia if this happens every day and she says pretty much.

Holly says Todrick has no idea how it is and says Abby is making this harder than it has to be and says he’s made 3000 videos and none were this hard. Abby is in the middle of the street ready to block traffic. They all honk at her. Abby wants them to dance in the street but Jessa says no.

Abby is trying to stop traffic but the girls are dancing with Todrick on the sidewalk instead. A woman screams idiot at Abby. Todrick calls a wrap and it’s done. They still have no group number ready for the competition. JoJo says they’re not ready at all and doesn’t know what Abby is thinking.

Jessa says Abby can’t manage her time at all. Holly says they’re going into competition with an unfinished dance and the moms agree it’s crazy.

Gianna says the group is before the trios. Jill says Abby is not doing their job and the girls had to pull things together. The girls talk but aren’t sure. Ashlee wonders Abby will show up to see Brynn’s trio perform. Todrick is there and greets them.

Melissa says Todrick went out of his way to shoot the ad and came to see them even though he has a flight in a couple of hours. He’s surprised Abby isn’t there. He says it’s weird the group dance is a commercial.

Holly says the girls had to scramble and Abby is late and she doesn’t care about the group and it’s par for the course with Abby. Todrick tells them Abby is crazy but they are learning something valuable and says they’ll be prepared for anything in the real world.

Abby finally shows up and Todrick sits to watch the number. They do the group number. They play a Todrick song and it’s got the ALDC lyrics. It’s insane. It’s like a commercial competing as a dance number. It might have been okay except for the ad song playing.

Abby says if they had four more hours they could have done another one. Holly says she hopes the judges get past that it was just a commercial. Jill says it’s an infomercial. Todrick says it was cute but admits he’s never been to a dance competition.

Abby tells them to get moving on the trios. Ashlee says the pressure is on when Abby brings up that if Brynn’s trio wins, she makes the ALDC team. The trios prepare their hair and makeup. Jill doesn’t want Brynn to be on the team and hopes Maddie wins.

She says it’s about Ashlee always picking on her kid. Abby talks to the trios and gives last minute notes. Holly says she’s proud of how Nia handled this and she says why would she be mad that her teammates of 12 years didn’t pick her and Holly says at least she can laugh. Brynn’s trio is up first and Ashlee hopes she nails it. Looked good. Abby says it was flawless but was it good enough.

Next is Maddie’s trio. Melissa says Ashlee is toxic and needs to go and hopes Maddie’s trio wins. Melissa sees problems with the number and says Oh God. Jill cheers and says they looked great but Maddie came out of a turn early and hopes the judges didn’t see it.

She says she wasn’t sure it would happen and says this makes her so happy and Brynn will be on the team and the moms can’t stop it. Jessa says the numbers they gave are backwards and they should ask for the score sheets.

Mackenzie says her mom is crazy but Brynn’s a good dancer. Jill says Ashlee has been nothing but rude and thinks her kid is better than everyone else. Abby brings up the scores that Jill and Melissa brought up. Abby says she talked to the judge and they confirmed they won by two points.

Jill doesn’t believe her but Abby has something on her phone. Jill says they want the score sheets and tells Ashlee to go cry somewhere and talks smack to Brynn. Ashlee tells Abby she can’t believe how mean they are.

Kendall tells her mom that Ashlee said she’s mean. Jill calls Ashlee stupid and says no one said it was rigged. Jill says she won’t listen to her lies. Jill tells Abby she doesn’t want that stupid sh-t on her team. Ashlee says if they don’t want her fine.

They walk out and Brynn is bawling. Ashlee says Brynn got what she wanted and Jill crapped all over them. Kira isn’t happy that she’s walking back into all of this drama.