‘Days of Our Lives’ Spoilers: Chloe and Deimos Make Love – Nicole Shows Up to Find Deimos Alive, Demands His Return to Salem 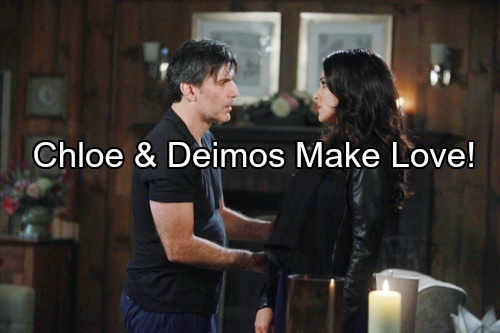 Days of Our Lives (DOOL) spoilers tease that Chloe (Nadia Bjorlin) will begin to feel a strong connection with Deimos (Vincent Irizarry). She knows that Deimos has faced a lot of pain in his lifetime. He’s made some mistakes, but so has Chloe. These two have an attraction that they just can’t deny.

Of course, Deimos also has a manipulative side. He always has many motives when it comes to love. Deimos has been trying to gain Chloe’s trust so he could secure her help. However, he truly seems to be interested in Chloe and her many layers.

Both Chloe and Deimos are dealing with mixed emotions, but they’ll soon figure out what they want – at least in that moment. Days of Our Lives spoilers reveal that Deimos and Chloe will make love. There may be some regret afterward, especially on Chloe’s part.

Still, it was bound to happen at some point. They might as well hop in bed and relieve those burning desires. That doesn’t mean Deimos has given up on Nicole (Arianna Zucker). She looks just like the love he lost.

Deimos is captivated by Nicole’s beauty and he honestly believes they could be magnificent together.

Nicole and Deimos had a little tiff just before he took his river ride, but it was nothing like the quarrel he had with Kate (Lauren Koslow). That confrontation almost cost Deimos his life. Days spoilers indicate that Chloe will be shocked when Deimos admits Kate attempted to kill him.

Kate didn’t force Deimos over the edge, but she struck the blow that caused his fall.

Once Chloe gets updates on this info, she’ll call Nicole in hopes of getting her side of the story. DOOL spoilers say Chloe will learn that Kate is setting Nicole up. She’ll inform Deimos that Kate is trying to frame Nicole for his murder.

Deimos will be surprised by the news, but he really shouldn’t be. This certainly sounds like a move straight out of Kate’s playbook. When Nicole gets suspicious of what Chloe is hiding, she’ll drop by unannounced. Nicole will be stunned when she finds out Deimos survived his tumble.

Naturally, she’ll want Deimos to return to Salem. Nicole needs Deimos to get her off the hook.

Days of Our Lives spoilers say Deimos will decide to head home, but he’ll have a plan in mind. Deimos won’t want to tell anyone that he’s alive just yet. Nicole won’t like the idea of dragging this out, but Deimos will promise that the payoff will be worth it. He’ll want Kate to suffer for what she’s done.

Despite her reservations, Nicole will probably relent. She’ll agree that Kate deserves a good dose of vengeance. Besides, Deimos is going to do what he wants anyway. We could see some intriguing shifts in Deimos and Nicole’s bond as this plot moves along. Days spoilers hint that they could still have a shot at a real relationship.

Now that Victor (John Aniston) has double-crossed Nicole, her scheme appears to be off the table. Nicole may determine that she actually wants to be with Deimos. Will Chloe get in the way of Deimos and Nicole’s budding romance?

Stick with DOOL and don’t forget to check CDL often for the latest Days of Our Lives spoilers, updates and news.