Days of Our Lives Spoilers: Sonny Back for Ailing Victor or Will’s Return From The Dead – Set Pic Gives Storyline Clues! 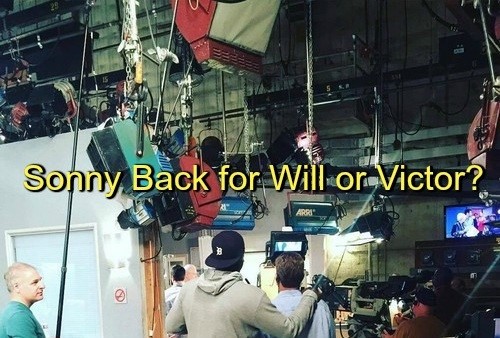 “Days of Our Lives” spoilers (DOOL) tease that there could be a few hints about Sonny’s (Freddie Smith) upcoming return to Salem. We first learned Sonny was most likely returning when Vincent Irizarry (Deimos) accidentally tweeted a picture with Smith in the background. Irizarry claimed he was a lookalike stagehand, but who was he kidding? DOOL fans knew better.

Now another picture has surfaced and it prompted Jason47’s “Days” website to confirm what we already knew. Smith is indeed filming again at the NBC soap. We don’t know how long Sonny will be sticking around, but the second pic may provide some clues about his storyline.

The photo was taken on DOOL’s hospital set. If you look closely, you can see several characters standing near Sonny on the monitor in the right-hand corner.

It requires a lot of squinting, but there are a couple of recognizable images when the monitor portion is blown up. It appears Caroline (Peggy McCay) and Adrienne (Judi Evans) are in the room with Sonny. There are two more characters visible in the shot, but they’re a little tougher to make out. We may just have to wait and see who else is stopping by to visit a sick or injured loved one.

That brings us to the next clue. If Sonny, Adrienne and Caroline are all gathered around this hospital bed, who might be in it? The most logical options would be Victor (John Aniston) or Will (Chandler Massey). If it’s Victor, Deimos might be responsible for putting him there. It’s also possible that Victor’s health will decline.

However, this picture could instead point to a return for Will. Jeffrey Ballard, Massey’s former publicist, made a statement about his prior client and good friend’s potential future with “Days of Our Lives.” Ballard could neither confirm nor deny that Massey would be returning as Will, but many viewers remain hopeful.

Maybe the real Will has been held hostage somewhere and the murdered Will was actually a DiMera doppelganger. Whatever the case, it seems likely that either Victor’s condition or Will’s sudden return from the “dead” will bring Sonny to town. It should be nice to see Sonny back home where he belongs.

The scene in the hospital should air shortly before or after the Olympics this August. There’ll be a two-week hiatus for the event. We’ll give you updates if we hear any news about Sonny’s exciting storyline. Stay tuned to “Days of Our Lives” to see what unfolds.

So “Days” fans, what do you think about Sonny’s return? Will it tie in with a story involving Victor or Will? Voice your opinion in the comments below and don’t forget to check CDL often for the latest “Days of Our Lives” spoilers, updates and news.