BY Sean O'Brien on March 24, 2016 | Comments: Leave Comments
Related : Days of Our Lives, General Hospital, Hot News, Soap Opera, Spoiler, Television, The Bold and the Beautiful, The Young and the Restless 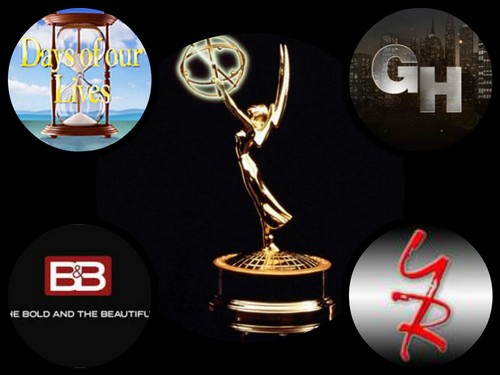 The official 43 Annual Daytime Emmy Awards Nominees list is in, the 2016 nominations were announced on CBS’s ‘The Talk’ on Thursday March 24.

While some of the Daytime nominees seem like no-brainers, some of the nominations have ‘Y&R’ ‘Days,’ ‘B&B,’ and ‘GH’ fans scratching their heads. Sadly, there is a chance that NBC’s soap opera ‘Days Of Our Lives’ could walk away from the 2016 Daytime Emmy Awards with ZERO Emmy’s. The cast of ‘DOOL’ was only nominated in three categories, plus the outstanding daytime drama.

All four soaps were listed as nominees in the Outstanding Drama Series category. Usually ‘The Young And The Restless’ cleans house in this category. 2015 was an interesting year for ‘General Hospital,’ but it’s hard to really gauge who stands a chance at winning without knowing which scenes they entered in to the competition.

If ‘The Bold And The Beautiful’ cashed in on their transgender storyline – it may give them an edge over ‘Y&R.’ If ‘DOOL’ is using one of their numerous and heart-wrenching death scenes, they could stand a chance at winning the competition this year as well.

Moving on to the Outstanding Lead Actress nominations. ‘The Young And The Restless’ only has one leading lady in this category this year – Tracy Bregman. Although she isn’t a crucial character in Genoa City these days, her cancer scenes with on-screen hubby Christian LeBlanc could easily take home the award.

‘Days Of Our Lives’ stars Mary Beth Evans and Kassie DePaiva are also nominated. Kassie has some heart breaking scenes in 2015 following the death of her daughter Paige. From ‘General Hospital’ we have Finola Hughes and Maura West, we love Ava Jerome and Anna Devane – but can their scenes really compete with someone’s husband getting cancer or daughter dying?

No ‘Days Of Our Lives’ or ‘The Bold And The Beautiful’ stars were nominated in the Outstanding Lead Actor category at the 2016 Daytime Emmy’s. From ‘The Young And The Restless’ we have Kristoff St. John, Justin Hartley, and Christian LeBlanc.

And, from ‘General Hospital’ we have Tyler Christopher and Anthony Geary. Let’s be honest, can any actors’ scenes really compete with Anthony Geary’s emotional farewell as Luke Spencer. Although a lot of fans were unimpressed with the storyline, you have to admit Geary acted the hell out of the scenes. Again, Christian LeBlanc’s emotional cancer scenes could give Tony a run for his money.

The Outstanding Supporting Actress nominees are a bizarre assortment of stars this year. ‘General Hospital’ doesn’t have any cast members in the running.

From ‘B&B’ we have Linsey Godfrey (Caroline Spencer), from ‘Days’ Melissa Reeves (Jennifer Horton), and from ‘The Young And The Restless’ Laura Lee Bell (Christine Williams). This category will be really any one’s guess this year. We honestly can’t think of a single reason any of those three actresses would stand out more than the other. In all honesty, we are more interested in why so many amazing actresses didn’t make the cut.

The Outstanding Supporting Actor also has no nominees from ‘Days Of Our Lives.’ And, it is also almost as random as the supporting actresses categories. From ‘Y&R’ is Steve Burton (Dylan McAvoy). And, from ‘General Hospital’ is Dominic Zompragna (Dante) and Sean Blakemore (Shawn).

The man to beat this year will most likely be Jacob Young from ‘The Bold And The Beautiful.’ Between his scenes with his transgender wife Maya and his meltdowns over pictures hanging on the wall in the Forrester Mansion – there are definitely some intense scenes that he could have submitted in to the running.

But, her emotional scenes with her on-screen parents Robin and Patrick reuniting to give her a decent shot. True O’Brien and Ashlyn Pearce’s characters were both killed off in 2015. But, death scenes do tend to give actors a profound edge in the competition.

Is there really any chance that Bryan Craig’s Bi-polar meltdowns aren’t going to win him the Emmy this year? Although, Max Ehrich could surprise up with his rare appearances as Michael Baldwin’s son Fenmore. Learning your father has cancer could give Morgan Corinthos’ manic episodes a run for their money.

‘Days Of Our Lives’ was vastly snubbed this year. There are so many emotional scenes in 2015 and talented actors that didn’t receive any recognition. There will for sure be some fan outcries on social media.

Typically ‘The Young And The Restless’ cleans house at the Daytime Emmy Awards, but there is a decent chance that ‘General Hospital’ will give the CBS soap opera a run for their money this year – they definitely have more nominees in the running.

So soap fans, what do you think of the official list of 2016 Daytime Emmy nominations? Are you shocked by ‘Days’ lack of nominations? Could ‘GH’ take home more awards than ‘Y&R?’ And what stars are you shocked didn’t make the cut? Let us know what you think in the comments below and come back to CDL for soap spoilers and news everyday!