BY Stormy Elizabeth on January 26, 2016 | Comments: 2 comments
Related : Days of Our Lives, General Hospital, Soap Opera, Spoiler, Television, The Bold and the Beautiful, The Young and the Restless 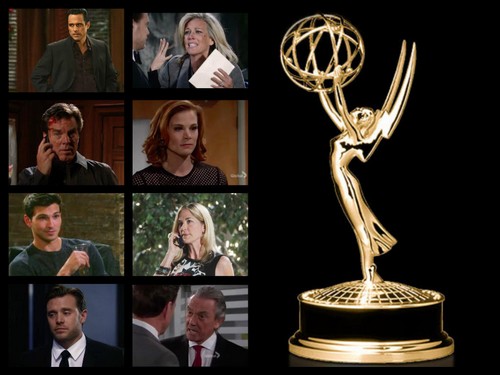 Soap fans are eagerly awaiting the announcement for the 2016 Daytime Emmy Awards nominations which will be announced Wednesday, January 27 at 9 am Pacific, noon on the East Coast. But for now, check out our list of who we think deserves to be honored for “The Young and The Restless” – “General Hospital” – “The Bold and The Beautiful” and “Days of Our Lives” with a Daytime Emmy nomination.

Peter Bergman – Bergman was convincing in his dual parts as Marco Annicelli and Jack Abbott. He pulled us in masterfully so that even when Jack faced off with Marco, you forgot it was the same actor in both roles.

Justin Hartley – Hartley’s sincere performance as he convinced Chelsea that he was Adam back from the dead had us all in tears as we felt their joy. Adam’s trial for the hit and run of Delia was gripping as well as he dealt with his guilt and pain.

Burgess Jenkins – On his way out of Y&R, Jenkins turned in some stand out scenes, particularly at Adam’s trial when he painfully acknowledged his culpability in Delia’s death. His explosion at his wedding to Chelsea was also fine work.

Eric Braeden – Victor is not one to get overly emotional, unless that emotion is anger. But when he had that strange experience of a vision of Christmas future without Nikki, his heartbreak was palpable. Who knew he could play vulnerable so well?

“The Young and The Restless” (Y&R) – Actress

Gina Tognoni – Phyllis is always a strong woman, but when she found out she had been sleeping with the enemy for months, her outrage was epic. As she discovered Victor had set her up to be raped by a criminal for months, we could see the fires of revenge begin to burn.

Kelly Sullivan – Sage’s constant attention to baby Christian and her frustration that she couldn’t hold her son were hard enough to watch, but when she lost him, her pain was indelible. She did masterful work as a grieving mother who wasn’t ready to leave her son behind.

Sharon Case – Poor Sharon was perfect as Dr Anderson’s victim after she miscarried her child with Dylan. She played the mental patient to a tee as she was conned into thinking she delivered Dylan’s child. Her unbalance and uncertainty was credible as she was drugged into submission.

Melissa Claire Egan – Chelsea’s discovery that Gabe was her husband Adam back from the dead was impressive. As her stunned disbelief turned into joyous acceptance, we got to witness a whole range of emotion within moments – all stunningly performed. 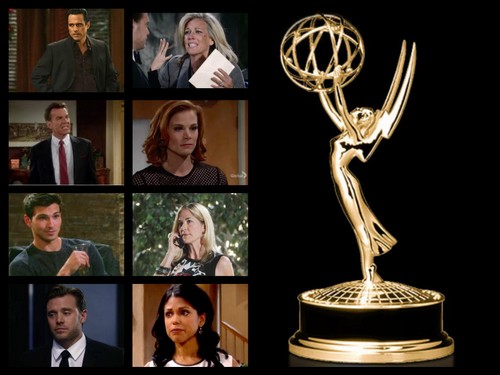 “The Bold and The Beautiful” – Actor

Thorsten Kaye – As the power-hungry Ridge, Kaye turned a stellar performance with his hypocritical dealing with son Thomas chastising him for his loose ways while keeping the secret that his wife is carrying his grandson, not his son. Devilishly diabolical…

Don Diamont – Bill had a busy year exposing Maya’s secret, making power plays at Forrester Creations and trying to turn over a new leaf and be less of a cad when it came to Katie. Every time Diamont is on the screen, his swagger is captivating.

Scott Clifton – Clifton plays the good guy well and his scenes are always genuine so when he had to play mediator between rivals Steffy and Ivy, it was nice to see him put his foot down. His honesty and sincerity as he dealt with both was a rare treat in a soap realm full of bad guys.

“The Bold and The Beautiful” – Actress

Karla Mosley – Mosley embraced the shocking Maya/Myron transgender storyline and rocked it with vulnerability and depth. Her anxiety over telling Rick was genuine and her joy at his acceptance was tear jerking and an obvious choice for a nom with this timely plot.

Heather Tom – Tom plays Katie’s inexplicable optimism with candor and while B&B fans may be frustrated that she always gives Brooke and Bill the benefit of the doubt, her heartfelt performances convince us she wants the best for all.

Katherine Kelly Lang – Lang knows it’s hard to play the bad girl, but she does it so well. Brooke’s struggle to stay off the bottle and stay off her sister’s husband have been good TV. Brooke’s decision to isolate herself to avoid being bad was both captivating and sad. 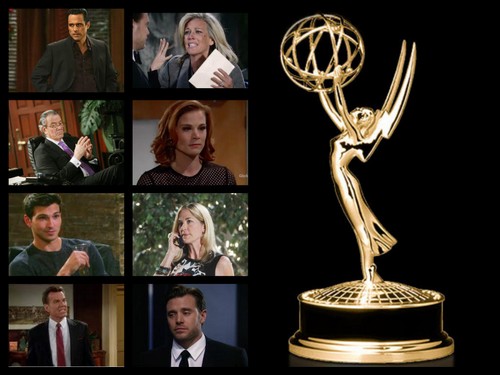 “Days of Our Lives” – Actor

Robert Scott Wilson – Wilson was utterly convincing as Ben the Necktie Killer grappling with rage, anger, and sadness at his actions. A survivor of childhood abuse, Ben’s downward mental spiral was played to perfection as he thinned the herd in Salem.

Peter Reckell – Reckell’s final scenes as Bo represented the end of the Bo and Hope legacy and were hard to watch knowing he was on his way out of DOOL for good. His passing was poignant and as it should have been, with love of his life Hope at his side.

Billy Flynn – Flynn has been a happy recast as Chad DiMera and his scenes where he professed his love for Abigail were moving as was his work when Abby revealed he was the father of Thomas which allowed him to break free of Andre. Good stuff there.

Bryan Datillo – Datillo was captivating when he played a devastated Lucas as he discovered that his son Will had fallen prey to the Necktie Killer. His grief at the morgue with Sami as they saw their son’s body and again at the funeral were masterful.

“Days of Our Lives” – Actress

Kassie DePaiva – We know DePaiva is on her way out of DOOL, but her work continues to be superb as Eve. As she dealt with the horrifying news that her daughter Paige had also succumbed to the Necktie Killer, we felt her pain and her scenes at Paige’s funeral were visceral.

Kristian Alfonso – Alfonso was grief personified as Hope as she held Bo in her arms while he drew his last breath. She was magnetic as Hope’s grief turned to anger and she lit out on a quest for vengeance over Bo’s death. Excellent work as always.

Peggy McKay – McKay portrays Caroline’s struggle with Alzheimer’s to a tee and has brought real depth to this important crisis of aging. Her visions of Bo’s death then her realization she had outlived her son were heartbreaking.

Lauren Koslow – Koslow’s Kate is still going strong as Lucas’ evil mom. Her revolting acts of exposing Lucas and Adrienne’s affair then taking her son’s job after Victor fired him were engrossing. Her epic fight with Lucas that left her in tears was solid work.

Maurice Benard – Hardly a week goes by without Benard pulling out a show stopping scene, but his recent work with Morgan and his tangible guilt over passing the bipolar gene to his son were impossible to turn away from – the vulnerability, the frustration – all well done.

Bryan Craig – As we finally found out that Morgan was not just a wild child, but was struggling with a mental health crisis, Craig dug in and flexed his acting chops. His raw performances as he grappled with his mental spiral and diagnosis were flawless.

Jason Thompson – Poor Patrick has had one heartbreak after another and his scenes with Sam and Emma over their split were finely done. The heart wrenching work Thompson did with his guilt over Emma’s pain and the knowledge that he had failed Robin was gripping.

Billy Miller – Recasts always carry the potential for failure, but Miller as amnesia Jake Doe then Jason Morgan has been impressive. His chemistry with Liz and Sam was taut and watching him grapple with the hard truth of his identity reveal was pure magic.

Laura Wright – Wright is another workhorse actress who does drama like it’s second nature. Her ordeal with Sonny’s shooting and paralysis, piled on with Morgan’s bipolar diagnosis have shown her frustrated and sad, balanced against her joy at Jason’s reveal. Top notch work.

Rebecca Herbst – Herbst upped her game this year as she pulled off one of the most polarizing plots on daytime drama with her scheme to hide Jason’s identity. Her desperation, mad love for Jason, and fierce fight to keep him at all costs were both frustrating and hypnotic.

Maura West – Whether you hated her as Ava or hated her as Denise, West’s work on GH has been stellar. Her scenes where she pleaded with Silas to let her die rather than use Avery as a donor and her outrage when she discovered he did it anyway were her best work.

Rebecca Budig – This soap vet has been captivating as Hayden. Budig was brought in for a short arc but fan adoration won her a permanent contract spot to stick around as the newest schemer in Port Charles. She’s feisty, fearless, passionate and problematic all at once.

What do you think soap fans? Who do you want to see land a Daytime Emmy Awards nomination? Who do you think deserves the accolade? Share your thoughts in the comments below and come back to CDL often for daily soap spoilers, news and more.