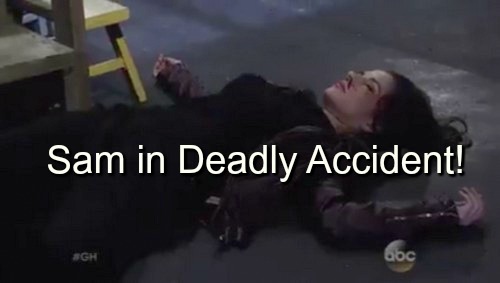 GH spoilers reveal that now that Jason is determined to recover his memories and his life with Sam, he will make it clear to Jake that he’s never coming home to Liz Webber (Rebecca Herbst) but will reassure his son that he’s always going to be his dad.

That’s not good enough for a kid who has spent the bulk of the life he can remember without a mom or dad at the hands of sociopath Helena Cassadine (Constance Towers). Jake wants Liz and Jason under the same roof with him and he sees just one obstacle to that goal – Sam!

We’ve seen Jake drawing pictures of a grim-looking Sam, but now Jake will try and bring that drawing to life (or death). Sam will come to Liz’s house and Jake will lure her to the basement door. Then he gets lucky and Sam, always in her ridiculous high heels, takes a tumble down the wooden stairs.

Liz’s basement looks like a dungeon at Wyndemere, so this is all pretty scary. GH spoilers indicate Jake will be surprised but pleased that Sam fell into his trap – literally. With Sam in the basement, Jake can roll her someplace, tie her up and gag her, or just stash her away – surely he’s got those skills…

With Sam out of the way, Jake feels like things will be fine now. Of course, Jason will notice that Sam has gone missing. But as Liz and Jason have both mentioned recently, the basement is rarely used. How will Sam alert Jason to her presence?

Looks like Jason will find and save Sam and rescuing her will trigger a whole new batch of memories that has him ready to indulge their passion and take her to bed. Jake will unwittingly cement Sam and Jason’s relationship rather than killing it (or her).

But another nagging question is whether Liz could be blamed for her son’s actions. Sam already has Jason believing that Liz is the culprit behind the disturbances at her house. Will Jason knee jerk to thinking that Liz tried to harm her rival for his affections?

Does Jason have such little faith in Liz that he would accuse her of sending Sam tumbling down the stairs? GH spoilers reveal that Liz will soon get a dire warning from Franco (Roger Howarth) about Jake’s dark leanings, but she won’t take him seriously.

Once Jason and Liz discover what Jake did to Sam, though, they won’t be able to deny any longer just how disturbed their son is. What’s next? A time out at Shadybrook for Jake? How will Jason and Liz deal with a son who is obviously a danger to those around him?

Don’t miss a moment of this week’s GH as little Jake’s rage boils over and he lashes out at Sam. And be sure to check back with CDL often for more “General Hospital” spoilers and updates.