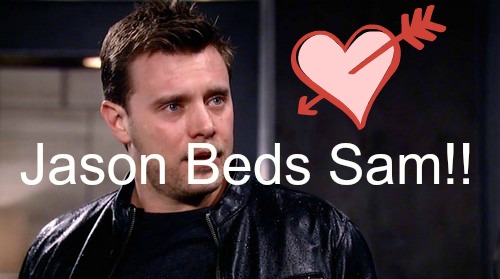 “General Hospital” (GH) spoilers hint that there are two storylines moving forward that will combust and see Jason Morgan (Billy Miller) and Sam Morgan (Kelly Monaco) reignite their passion and get intimate once again – much to Liz Webber’s (Rebecca Herbst) dismay.

First, Jason is recalling memories of his life with Sam and, more importantly, his feelings for Sam. The sexy rain memory was just for starters. Jason has liked Sam as a friend for a while but even knowing she was his wife didn’t bring up any feelings of passion or love.

But newly recovered memories – plus the end of his romance with Liz – has opened him up. Jason’s feelings are returning in full but Sam will be cautious. She wants him back more than anything, but doesn’t feel like she could take the hurt if Jason turned away from her later.

Second, Jake Spencer (James Nigbor) is a festering pot of rage. He clearly blames Sam for his father moving out of their house and breaking off the engagement with his mom. Jason has told Sam that he doesn’t want to tell Jake that his mom Liz is a liar and that’s why he left them.

This has allowed Jake to focus all his negative energy on Sam. Soon Franco (Roger Howarth) will try and warn Liz about Jake’s precarious mental state. Liz may brush him off because he’s Franco and Jason may think this is Franco manipulating him – based on what he’s been told of their history by Sam.

This means the escalating warning signs about Jake’s potential for destruction will go unnoticed by Liz and Jason until it’s too late. Jake will take out his frustration on Sam and she’ll be in physical danger at the hands of the miniature menace.

Jason and Liz will figure out that Jake has done something to Sam and Jason will have to rescue his wife from his son – what a mess. The upshot of all that drama is that Jason will be devastated at the idea of losing her. The rescue could well be the trigger that unlocks all the memories of his life with Sam.

After Jason rescues her, he will take Sam to bed and JaSam fans will finally get to see their fave couple together. Plus we’ll see what kind of chemistry Billy Miller and Kelly Monaco will have as a couple. No doubt we can expect some serious sizzle.

Although it will take Sam’s near death to reignite Jason’s passion, it will burn hotter than ever. Look for a sexy Jason and Sam encounter as February sweeps unfold. This will put a final nail in the coffin for Liason hopefuls as Liz will know that she’s lost Jason for good.

Don’t miss a moment of upcoming GH episodes to see all this unfold and check back to CDL often for more “General Hospital” spoilers and news.