General Hospital (GH) Spoilers: Ava The Wild Card – Anna Closes In On Panicked Paul, Sets Ava Up to Go Down for Gun Running 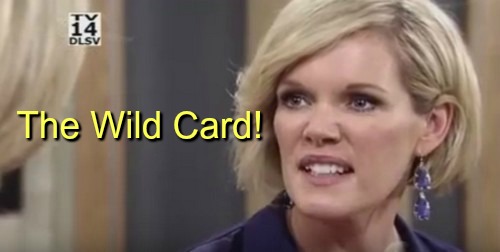 “General Hospital” (GH) spoilers indicate that the Port Charles mob war will reach critical mass soon and an explosion is overdue. Anna Devane (Finola Hughes) is closing in on Paul Hornsby (Richard Burgi) and once he figures out how close she is to cracking his dirty secret life wide open, Paul will panic.

People in a panic do dumb things and Paul’s first instinct is self-preservation and he may make a critical misstep when he sets Ava Jerome (Maura West) up to take the fall for his gun running activities with Raj. Ava alone is not a solution to his problem.

Carlos Rivera (Jeffrey Vincent Parise) might be willing to serve time as a patsy for his mob boss, but no way will Ava go down easy. Ava is like a cockroach you can’t kill – if Paul thinks he can set her up and walk away with clean hands, he’s kidding himself.

Plus Paul doesn’t know which crimes Anna is pursuing him over – he knows she’s interested in Carlos, but he may assume Anna has more cards in her hand than she does. As of now, Anna has no idea that Ava is involved and the evidence she’s working all traces back to Paul.

Paul may make a bad move throwing Ava under the bus for a crime Anna isn’t even investigating. Even if Paul can manage to make Ava look culpable for the gun running activity, that’s not the dirt that Anna has – she still thinks Paul looks good for the Sloane shooting and Carlos body swap.

No way can Paul blame all of that on Ava. What Paul doesn’t realize is Anna’s perseverant nature. She’s fixed on him and won’t let go. Setting Ava up as the lone culprit for the guns may not work – he can even try and tie Carlos back to Ava as Sonny’s shooter.

Ava does have motive for wanting Sonny dead. But Sloane had nothing to do with Ava and unless Paul can retroactively create evidence to link them, that’s a critical flaw in Paul’s plan. Sonny Corinthos (Maurice Benard) is also investigating the Jerome mob activities.

If he and Anna compared notes, they would probably have enough to nail Paul for all of this. But Sonny is missing the key piece of information that Paul is involved. Sonny sees Paul as just another tough talking DA who is determined to take him down. Sonny has seen that before and survived.

Anna is yet unaware of Raj’s presence in Port Charles or the guns being dealt through the town. And Sonny is unaware that Carlos is alive and Sloane was murdered. And the PCPD seems to have none of this info – all they have is what Anna has told Jordan Ashford (Vinessa Antoine).

GH spoilers indicate that Ava will soon need a good criminal defense attorney – and she will definitely fight back. Not only does Ava not want to go back to Pentonville, but her custody of baby Avery is on the line. She would flip on Paul in a heartbeat except for that Connie confession recording he has.

But if Ava is facing life in prison anyway for running guns, she would take Paul down with her. GH spoilers also indicate that Julian Jerome (William deVry) will also step into this mess soon to try and protect his sister – but will it be too late?

Stay tuned to GH for more on the messy mob war and check back with CDL often for more “General Hospital” spoilers and news.