BY Amanda Austin on August 14, 2014 | Comments: 18 comments
Related : Days of Our Lives, General Hospital, Hot News, Soap Opera, Spoiler, Television, The Bold and the Beautiful, The Young and the Restless 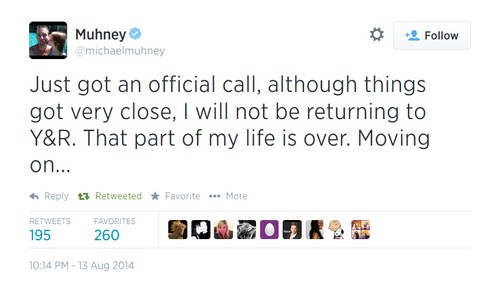 It has been over six months now since Michael Muhney was fired from The Young and the Restless, and scandal ensued. Although Jill Farren Phelps never publicly revealed why Muhney was fired from the CBS soap opera, stories emerged, never substantiated mind you, that he had groped his co-star Hunter King, which resulted in his dismissal. Coincidentally, Muhney’s character Adam Newman was killed off during the same time period that Muhney was fired. However after the fact it was revealed Adam Newman was still alive, since Muhney was no longer on the payroll, Phelps has only been showing scenes of Adam Newman’s hands or dressed as clown (which sadly are probably the most exciting part of the soap these days).

Michael Muhney’s legion of devoted fans were furious when he was fired from The Young and the Restless, and stormed social media with their protests. A huge number of Muhney’s fans even refused to watch the soap opera after he was fired, and their united boycott even put a dent in Y&R’s ratings. However, Jill Farren Phelps began showing scenes of Adam Newman’s hands and revealed the character was still alive. So, fans kept tuning in, hoping that when they finally showed the character’s face, it would be Michael Muhney’s face.

Today Michael Muhney confirmed on Twitter, that he is officially done with The Young and the Restless, and he will not be returning under any circumstances. This is the first time Muhney has even mentioned the soap opera since he was fired, which is why fans held on to the false hope that he might be returning. Muhney tweeted, “Just got an official call, although things got very close, I will not be returning to Y&R. That part of my life is over. Moving on…”

So, now there is no question about it, TPTB have to find an Adam Newman replacement. And, it will be interesting to see if Muhney’s loyal fans put their money where their mouths were, and really quit watching the show like they swore they would do if Michael Muhney didn’t return.

What do you think Y&R fans? Are you happy that Michael Muhney finally made it official that he will not be returning to Y&R and the speculation can finally stop? Does this open the door for another soap to hire the talented and popular actor? Will The Young and the Restless find a suitable replacement for Michael as Adam Newman now? Who will it be? Share your thoughts and theories in the comments below!

Update: Michael tweeted again – is he implying that a new role on a soap is in the planning stages? Let be super clear here – “tune in” means TV!! 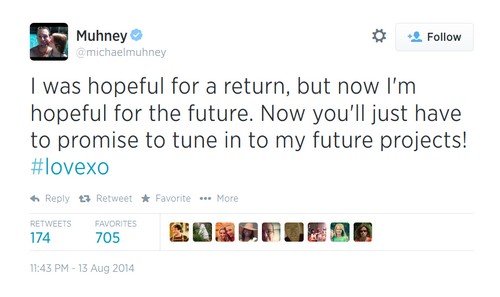