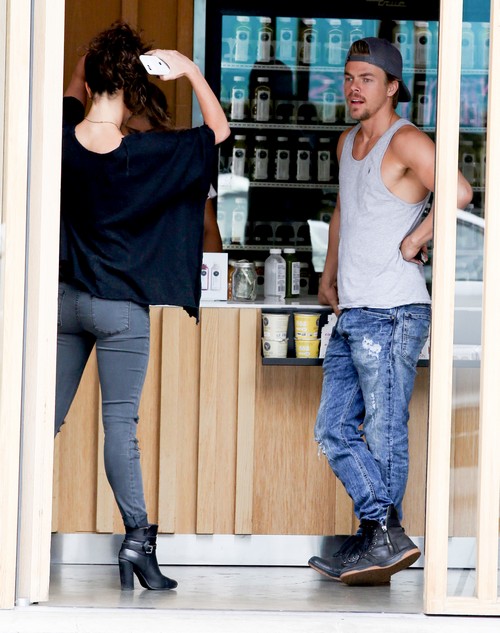 Does Derek Hough have a new girlfriend? The professional ballroom dancer and Nashville guest star was spotted with a mystery girl, a brunette, leaving a juice joint in Beverly Hills on May 5. The duo were casually dressed and appeared very chatty.

It’s been a bit since Derek was seriously been linked to anyone romantically. There was a lot of speculation during season 21 of ‘Dancing with the Stars’ that Derek Hough and dancing partner Bindi Irwin got super close and may have enjoyed a little romance. Of course that was tabloid nonsense but it made the Internet none the less.

There was no relationship between Bindi and Derek other than friendship and being season 21 winners of the coveted mirror ball. Bindi Irwin already had a boyfriend and they’re still together as far as we know.

Derek dated British actress India de Beaufort from for eight years, and the relationship ended in 2008. Coincidentally 2008 was the same year Derek was paired with actress Shannon Elizabeth on ‘Dancing with the Stars’ and the dancing partners started dating. That lasted about a year when Shannon and Derek called in quits in 2009.

In 2010 Derek was linked romantically to a British singer and dancer formerly known as Cheryl Coe. That lasted about a year. Then in 2013 Derek and ‘The Vampire Diaries’ star Nina Dobrev were reportedly dating.

There’s also been speculation that Derek was involved with Mark Ballas when he directed the singer’s music video for the song ‘Get My Name.’

Mark Ballas and Derek Hough ended up buying a house together, allegedly to fix up and flip for profit. HGTV broadcast the four episode series ‘Mark & Derek’s Excellent Flip’ in the spring of 2015.

So, who is this new lady in Derek Hough’s life? Is she just a friend? Did the two just grab a juice to celebrate Cinco de Mayo

Is the pretty mystery brunette one of the dancers who has been cast in for the NBC live broadcast of ‘Hairspray’ scheduled to air in December?

Derek has been cast as Corny Collins according to an April 27 press release. Perhaps they’re co-stars who are getting to know each other a little better and bonding over some juice?

‘Dancing With The Stars’ actor Derek Hough left a juice spot in Beverly Hills, California on May 5, 2016. Seen leaving with him was a mystery girl. The two talked with each other the entire time. FameFlynet