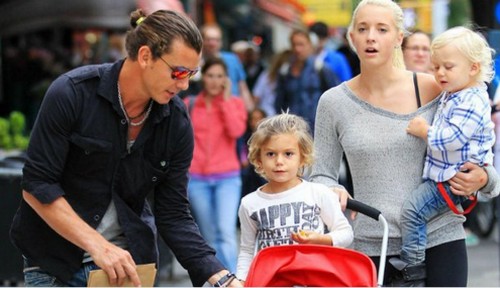 Uh oh! Is Gavin Rossdale back with Mindy Mann? Has a furious Gwen Stefani demanded that Rossdale keep the – alleged – cheating nanny away from the kids? Gwen may not want Gavin – it’s obvious the “Used to Love You” singer is happy living with Blake Shelton.

That doesn’t mean Stefani wants Mindy – the alleged husband-stealing nanny – anywhere near Kingston, Zuma and Apollo ever again! And rightfully so, don’t you think?

But hey, Gwen has found happily-ever-after, why can’t Gavin? An insider recently told OK! Gavin doesn’t really care what Gwen thinks anymore. The boys love, love, love Mindy – and Gavin has retained Mann’s nanny services once again. After all, why should the little ones shouldn’t be punished for daddy’s mistake? If Mindy is more than the nanny now, who cares?

Stefani has reportedly renovated Blake Shelton’s mansion in Oklahoma. Is a disgusted and infuriated Gwen going to make a play for sole custody of the children? The source divulged, “Gwen is horrified and fighting [Gavin] on [rehiring Mandy].”

After all the bad press following the revelation that Gavin Rossdale supposedly cheated on Gwen Stefani with Mindy Manny why would Rossdale want to make the situation worse? But there were allegations that Gwen cheated on Gavin first, with Blake. Maybe both Rossdale and Stefani should stop stirring the pot before the former couple does permanent damage to the three boys.

The friend in the inner circle revealed that basically Gavin Rossdale doesn’t care what Gwen thinks. “It’s as if Gavin feels he can do whatever he wants” and it doesn’t matter if it hurts Stefani. It certainly appears that Gwen doesn’t care what Gavin thinks, right?

Blake Shelton and Gwen Stefani are very much in love, possibly planning to get married and move Rossdale and Stefani’s three boys to Shelton’s big house in the woods. What if Gavin doesn’t want the kiddos living so far away in Oklahoma? Does the rocker get a say in that arrangement?

The 13-year Rossdale and Stefani marriage is O-V-E-R. Does it really matter if Mindy is Kingston, Zuma and Apollo’s nanny again? If Mindy Mann loves the children and they love her, is there really a problem here? Isn’t the main thing that the kids are healthy, happy and loved?