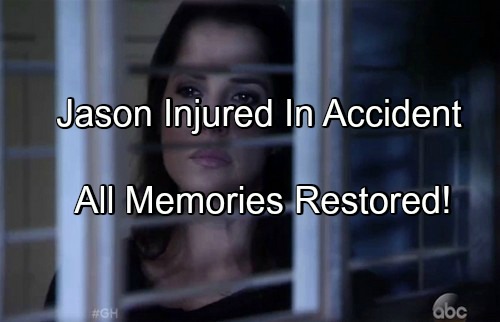 “General Hospital” (GH) spoilers for May sweeps this week and continuing on next week’s episodes include a shocker about Jason Morgan (Billy Miller) that will leave Sam Morgan (Kelly Monaco) stunned.

New GH spoilers video shows a horrific car accident involving a PCPD transport and it looks like Jason may be part of that potentially fatal crash.

Carlos Rivera (Jeffry V Parise), Dante Falconeri (Dominic Zamprogna) and Nathan West (Ryan Paevey) are all part of the car wreck and spoilers tease that Jason’s vehicle might be part of the pile up – or perhaps he’ll have to swerve to avoid the crash and have a wreck all of his own.

According to General Hospital spoilers, Jason will be banged up but not in critical condition and may even be well enough to give aid to the cops trapped in the PCPD vehicle. The new spoiler video shows a worried Sam waiting by the window for Jason to get home.

Sam will be worried when she sees Jason all battered looking but it’s what he has to say that really shocks her. Jason will tell her that his memories have returned. He may have been jarred or taken a bump to the head that cleared all the cobwebs and gave him back his life.

One nagging question from the video is – was Danny Morgan with Jason when he wrecked? Sam was alone at the window as she waited for Jason so where was their son? Hopefully he’s with Monica Quartermaine (Leslie Charleson) and not with Jason.

There have been some GH spoilers swirling that Jason and Sam would experience a loss – let’s hope it’s not little Danny… The bottom line is that Jason has all his memories back and we have to wonder what that means for everyone in Port Charles.

Will Carly Corinthos (Laura Wright) get her BFF back? Will Jason have a friendlier attitude towards Sonny Corinthos (Maurice Benard) and his mob organization? How will it affect how Jason sees Liz Webber (Rebecca Herbst) now that he can recall their messy love triangle past?

And how thrilled will Monica be that her son finally truly knows who he is? What do you think GH fans? Are you excited that Jason will get his memories back? Share your comments below and check back with CDL often for more “General Hospital” spoilers and news.