General Hospital (GH) Spoilers: Could Kiki and Dillon to Get a Shot at Romance – Robert Palmer Watkins Teases Fans 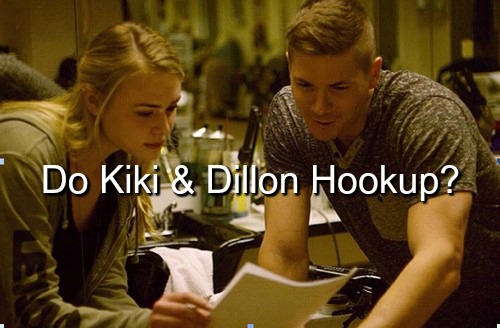 “General Hospital” (GH) spoilers straight from Dillon Quartermaine (Robert Palmer Watkins) tease a possible romance between his character and Kiki Jerome (Hayley Erin). Is it possible that we might see a future storyline with Kiki and Dillon?

Robert Palmer Watkins posted a pic on Instagram of him and Hayley together captioned “Killon?” Of course, this could be just a tease that means nothing, but GH showrunners are hit and miss about social media “leaks” coming true.

The GH script “leaked” by Ryan Paevey (aka Nathan West) that revealed the Vegas wedding of Hayden Barnes (Rebecca Budig) and Nikolas Cassadine (Tyler Christopher) – which we covered here – was 100% accurate.

After Kelly Thiebaud shared photos of herself on the GH set with a marked up script, there was a hasty denial that this was a legitimate spoiler and TPTB said she’s NOT coming back for #GHFanFeb. But you never know – TPTB at GH have been known to be less than transparent.

Consider that GH sources said that Brooklyn Rae Silzer would NOT leave GH with Jason Thomson and yet she is clearly gone – Emma Drake moved to California with her parents – so we may yet see Britt back to Port Charles – and we may also see a romance between Kiki and Dillon.

Let’s consider. Kiki clearly needs a more together guy than Morgan Corinthos (Bryan Craig). Not only is he a hot mess in general, but he’s due for a major bipolar spiral when he goes off his meds because he’s frustrated that they are affecting his sex life…

Plus Dillon may think he loves Lulu Spencer (Emme Rylan), but she still loves Dante Falconeri (Dominic Zamprogna) and we all know they will eventually end up back together. Even if Lulu gave Dillon a shot at love, it would not last.

Kiki and Dillon’s moms hate each other, but that’s not an obstacle since Ava Jerome (Maura West) and Sonny Corinthos (Maurice Benard) are mortal enemies and that hasn’t stopped them. Plus, there are many factors in favor of a Killon romance.

They are age appropriate – they are both single – Dillon makes movies and Kiki likes to watch them – and since Dillon works at Crimson with Kiki’s pseudo-mom Nina Clay (Michelle Stafford), Nina would cheer this pairing and pseudo-dad Franco (Roger Howarth) would love to see Kiki away from Morgan.

Even if it is just Robert Watkins joking around with pal Hayley Erin, we have to say a Killon romance sounds amazing and we would totally be shipping that. What do you think GH fans? Would you like to see Kiki and Dillon give love a chance? Do you think they would have chemistry as a pair?

Share your comments below on a possible Kiki-Dillon romance and come back to CDL often for daily “General Hospital” spoilers and news.