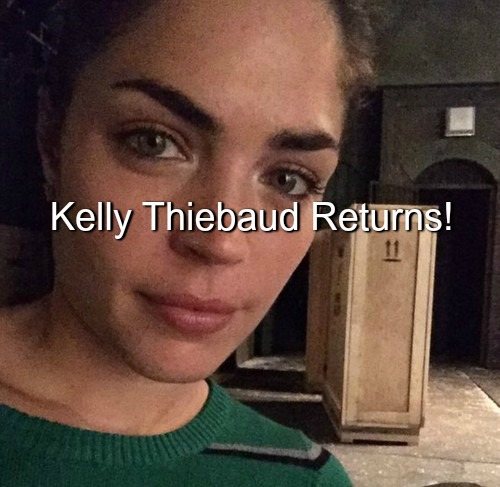 “General Hospital” (GH) spoilers tease that “The Britch” may be back for a turn in Port Charles. Kelly Thiebaud, Britt Westbourne’s portrayer, tweeted a couple of pics of herself on the GH set with the cryptic caption “can you guess where I am?”

One pic is Britt on the docks at the pier with suspicious looking crates behind her – perhaps ones destined for the Jerome Gallery with Raj’s guns inside them! The other pic is of her goofing around on a bed at General Hospital with a script tucked under her leg.

Could Britt be back for sweeps? That would be amazing. Hayden Barnes (Rebecca Budig) is trying to talk Nikolas Cassadine (Tyler Christopher) into a quickie wedding. Would the return of Nik’s shady ex-fiancée make him think twice before wedding another woman with a questionable past?

Also, GH needs doctors and Liesl Obrecht (Kathleen Gati) is chief of staff so surely she could hire back her naughty daughter if this is more than a cameo. After all, Nik never did file those charges for her faux kidnapping of Spencer Cassadine (Nicolas Bechtel) so she’s okay to come back. 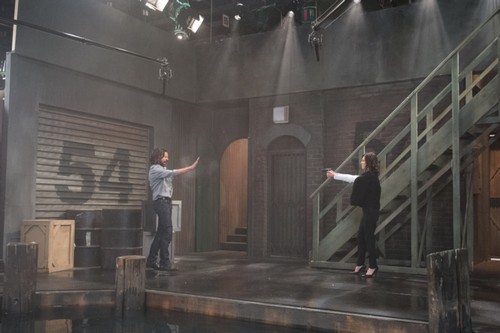 Plus, Nikolas can’t throw shade at anyone right now since he’s under his own cloud of suspicion and dealing with Hayden. Plus Brad Cooper (Parry Shen) has a wife crisis he still needs help with – maybe Britta could come up with a way to bail him out of the Rosalie quandary.

Nathan West (Ryan Paevey) would be thrilled to see his sister and since Liz Webber (Rebecca Herbst) is the most hated gal in town right now, maybe Britt could slip in unnoticed. It will be much less awkward now that Patrick Drake (Jason Thompson) has left town.

So what do you think GH fans? Are we looking at a February sweeps return for Britt? Even if she stops by for just an episode or two, it would be amazing. In the hospital pic, the script below her leg has highlighted lines and some flags stuck to pages like she’s been rehearsing. 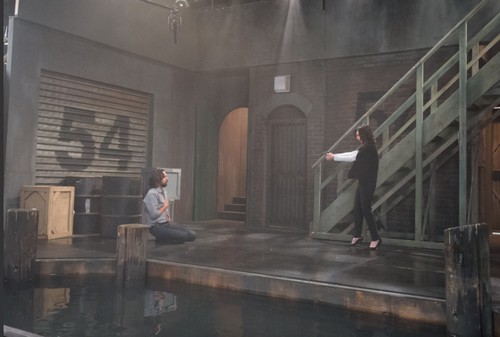 Looks like GH is pulling out all the stops as we heat up for sweeps. We just saw Lord Ashton, Nik and Hayden are talking marriage and may do a Vegas run. Alexis Davis (Nancy Lee Grahn) and Julian Jerome (William deVry) have their big day coming.

What else can we expect from sweeps? Fingers crossed we get Britt and Liesl with some kooky mom and daughter antics plus face time with Britt and Brad – at a minimum – and maybe more. Who knows, she might stick around this time.

Share your comments below on a possible return for Britt and check back with CDL often for more “General Hospital” spoilers on sweeps and more.

Can you guess where I am pic.twitter.com/sqnKSn74X7