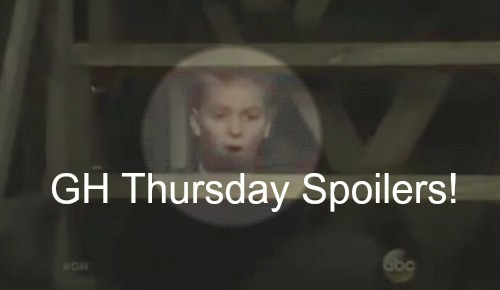 First, Jason Morgan (Billy Miller) stops by to check on Jake Spencer (James Nigbor) and Liz Webber (Rebecca Herbst) to make sure nothing else has happened at the house. Jason also discloses to Liz that he’s had more memories return.

She’ll be happy that his amnesia seems to be diminishing but not so happy to learn all the new memories seem to focus on his life with Sam Morgan (Kelly Monaco). Jake overhears – that kid is always eavesdropping – then demands to know when his dad is coming home.

Jason tries to explain that things are complicated but he’s not moving back in, he’s married to Sam but that he’s still his dad and will be there for him. This is not enough for Jake who rages and throws a tantrum that startles both Liz and Jason. More trouble is coming…

After Jason asked Sam if anyone had a vendetta against him, she’s been thinking about Franco (Roger Howarth). Sam heads to GH to confront Franco and accuse him of targeting Jason with the scare tactics at Liz’s house. Is Sam just fishing or does she now think it’s him and not Liz?

Franco is a changed man, but Sam doesn’t see that. He’ll assure her that he’s not Jason’s enemy, is a new friend of Liz, and hasn’t been making trouble anywhere. He’s working hard to be a productive member of society. Will Sam buy it?

Will Franco show her any of the disturbed doodlings done by Jake? Will Franco look back at the sketches and realize that Sam figures prominently in them and may be the focus of Jake’s psychosis? Will Franco warn her? Can he mention it or is he gagged by patient confidentiality rules?

Kiki Jerome (Hayley Erin) will let Morgan Corinthos (Bryan Craig) make his case about why he deserves another shot with her. Kiki is uncertain but finally agrees to do one date as a trial to see how it goes. Too bad Morgan’s bipolar is a ticking bomb according to recent GH spoilers.

A stunned Carly Corinthos (Laura Wright) rejoices to see Sonny Corinthos (Maurice Benard) on his feet and will not want to keep it quiet. Sonny will explain he needs Ava Jerome (Maura West) to think he’s weak so she won’t see what’s coming. That could keep Carly quiet.

Max Giambetti (Derk Cheetwood) also has an update for Sonny on Ava and Raj the gunrunner. Is Sonny going to try and take Raj and Ava down personally or let the PCPD handle it? Sonny needs evidence against Ava for the custody case so he can win Avery back.

Sonny wants to make a move, but will he use his resources or call the cops? And if he does call the cops, can Paul Hornsby (Richard Burgi) call off the raid or warn Ava away so that nothing comes of it? This mob mess is headed for a blow up in coming days – just in time for February sweeps.

Finally, Anna Devane (Finola Hughes) and Robert Scorpio (Tristan Rogers) are confident they are close to nabbing Carlos Rivera (Jeffrey Vincent Parise). They press the maternity clinic to give them any contact info they have on the couple that missed their appointment.

Did Sabrina Santiago (Teresa Castillo) leave her phone on when she tossed it into the woods? Was she leaving a clue for Anna to find her? Sabrina goes into labor while Robert and Anna are trying to pinpoint their location.

Meanwhile, Paul contacts Carlos and tells him that if Anna is in Halifax, he has to leave now. He can’t take the risk of Carlos being nabbed and ratting him out. Carlos has to choose getting away from Anna or helping Sabrina through labor.

Looks like Carlos will deliver their baby but then there are complications. He’s got to get Sabrina and the baby to the hospital. GH spoilers indicate they take off and Anna and Robert bust in and find blood and signs of disturbance and assume the worst – that Carlos has harmed Sabrina.

All this and more on Thursday January 28. Tune in to ABC every weekday for new GH episodes and check back with CDL often for tons more “General Hospital” spoilers.

Update: Here are what some fans at Soap Opera Spy Facebook Page have to say about Little Jake and the danger he poses:

He doesn’t understand when people talk to him. Jason told him how many times he’s not coming back and this kid doesn’t get it. He needs major therapy or he might hurt someone.

Think about it sure he was gone. But look at his roll models since he has been back. Liz and Laura.NO Wonder he’s acting out…

I can’t wait to see this tomorrow. Jake needs to have his butt spanked and told that he cannot make people do what he wants them to. Liz has the same problem, so I guess he got that from her!!!!

Well GH fans, those of you who follow CDL soaps know that Little Jake is going to be involved in some very dangerous violence to Sam really soon. Let’s see how it all turns out!