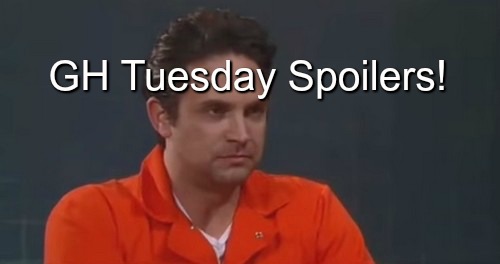 “General Hospital” (GH) spoilers for Tuesday January 26 reveal that Johnny Zacchara (Brandon Barash) gets a farewell visit from a devastated Lulu Spencer (Emme Rylan). Lulu is grateful that he covered for her with the PCPD on the Valerie Spencer (Brytni Sarpi) plot, but isn’t happy he’s going away for life.

Johnny will likely tell her again that Dante Falconeri (Dominic Zamprogna) isn’t worth all her heartbreak. Will she spill the beans that Dante is moving forward with the divorce? Will Johnny tell her he loves her? Looks like Lulu is the only one sad to see Johnny ship out.

Valerie is still stunned at the lengths Lulu went to in order to get her out of Dante’s life – especially when Valerie had already cut herself out of his life. So when Lulu tries to offer an apology, Valerie reacts strongly and negatively. Val doesn’t want to hear a word from Lulu.

Dante updates Valerie on where he stands with his wife – that’s he’s pursuing a divorce. But after this incident with Lulu, is Valerie done with Dante, even if he’s single? Val tells him that he can’t run to her then back to his wife and think she will be waiting for him.

Dante knows he wants to split from Lulu but isn’t sure about any future with Valerie. But that dynamic changes when Dante sees Curtis (Donnell Turner) checking out Val and flirting with her. Will Dante now want Val just so Curtis can’t have her?

Meanwhile Dillon Quartermaine (Robert Palmer Watkins) stands strong by Lulu’s side – he’ll listen to all her divorce woes and Val near-death story then help Lulu how to figure out how to patch things up with her cousin – Lulu knows she went too far and Val wasn’t 100% to blame for Dante cheating.

Nathan West (Ryan Paevey) corners Maxie Jones (Kirsten Storms) and calls her out on her lies about Johnny. He’s certain she knew Johnny was in Port Charles sooner than she said and knew about the tie in with Lulu. Maxie will try to explain herself, but Nathan won’t like it.

Julian Jerome (William deVry) wants to try and make peace with Sonny Corinthos (Maurice Benard) since he’s wedding Alexis Davis (Nancy Lee Grahn) and will be step-dad to one of Sonny’s kids. Will Sonny take the olive branch or slap it away?

Sonny is not known for being reasonable and everyone knows Julian ordered Carlos Rivera (Jeffrey Vincent Parise) to kill Duke Lavery (Ian Buchanan) even though he denies it. Sonny isn’t forgiving and don’t look for him to buddy up with Julian no matter who he’s marrying.

Julian also talks to Lucas Jones (Ryan Carnes) about his wedding plans. Since Alexis’ girls will be in the wedding, no doubt Julian wants Lucas to be part of it too – maybe as best man? But Julian is acting shifty and that concerns Lucas.

Any chance Julian might overhear Sonny talking to Max Giambetti (Derk Cheetwood) about the guns being shipped to Ava Jerome’s (Maura West) gallery? Plus, Sonny has another secret – the progress he made at the gym when he stood for the first time in months.

Looks like Epiphany Johnson (Sonya Eddy) will catch him on his feet and be ready to spread the good news – only Sonny doesn’t want anyone to know. Looks like he may be playing weak now to fool his enemies…

Epiphany tells Sonny that he should tell Carly Corinthos (Laura Wright) since she’s his wife – and Sonny agrees to consider. Sonny is feeling great right now – he can almost stand on his own two feet and he’s on the cusp of being able to take Ava down.

Don’t miss any of the Tuesday January 26 GH and come back to CDL every day for detailed “General Hospital” spoilers and news.