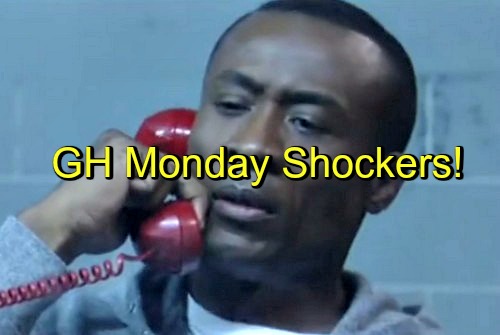 “General Hospital” (GH) spoilers reveal that Julian is caught red-handed on Monday’d episode, April 4, and Nikolas gets a shock from his wife. Also, Nina gets a critical phone call, Nathan’s in big trouble and Sam and Jason search for answers. Here’s what to expect on Monday’s GH next week.

Shawn Butler (Sean Blakemore) is back but, once again, we only get to see him from behind bars. Poor Shawn is still in Pentonville. Sam Morgan (Kelly Monaco) asks him questions about Hayden Barnes’ (Rebecca Budig) shooting while Jason Morgan (Billy Miller) hangs back.

Of course, Jason doesn’t remember much on Shawn and if Shawn reveals that Jake Doe was his real target, the poo will hit the proverbial fan between Jason and Sonny Corinthos (Maurice Benard). Will Shawn tell the truth or keep it zipped cause snitches get stitches?

Speaking of poo, Nathan West (Ryan Paevey) is in deep doody with Maxie Jones (Kirsten Storms) for never telling her he had a wife. Oh and the wife was Claudette and, oh yeah, apparently he still loves her. Whoops.

General Hospital spoilers reveal that Maxie is ready to walk out on Nathan – can he convince her to stay? Paging Dr Hottie Griffin Munro (Matt Cohen). They had killer chemistry! Are GH showrunners setting up a split for Naxie so she can get with Griffin? Are they plotting a Grixie pairing?

Nina Clay (Michelle Stafford) spouts off the great news to Julian Jerome (William DeVry) that Curtis Ashford (Donnell Turner) found the Crimson saboteur. Too bad Curtis didn’t get the chance to whisper to Nina in private that it’s her boss Julian.

#Awkward when that all comes out. How will Curtis play this? Looks like Julian will try and get her to drop the matter – but will Curtis reveal Julian’s dirty dealings right there in the man’s face? Nina will be furious and what can Julian say to excuse his dirty dealing?

What will Nina do? Plus, Nina will soon get a life-altering phone call. Is this about her baby making abilities? Nina’s sweetie Franco (Roger Howarth) chats up Liz Webber (Rebecca Herbst) who fills him in on all the drama at Casa Cassadine.

Liz tells Franco she has to take her kids and move out ASAP. Franco wonders if she’ll move back in with Jason – that sounds crazy, right? Liz has a plan that will put her on a path to independence nowhere near either of her exes.

Franco says he’s impressed with how she’ll pulling her act together. Aww. Friz as BFFs is sort of amazing. Plus, Liz has a new storyline coming after her brief hiatus due to the contract troubles.

Speaking of trouble, Nikolas Cassadine (Tyler Christopher) is in deep. Hayden makes it clear to Nikolas that a divorce is off the table unless he wants to go to jail for shooting her. Let the blackmail commence! Nikolas will be stunned not only that she knows, but has proof!

Over at GH, Tracy Quartermaine (Jane Elliot) is being her usual stubborn self, but then Hamilton Finn (Michael Easton) orders her back to bed ASAP. We know Tracy will show a softer side this week – will it be with Dr Finn?

Share your comments below on the hot action coming on the Monday April 4 GH – and check back with CDL often for more “General Hospital” spoilers and week ahead spoilers for all of next week.