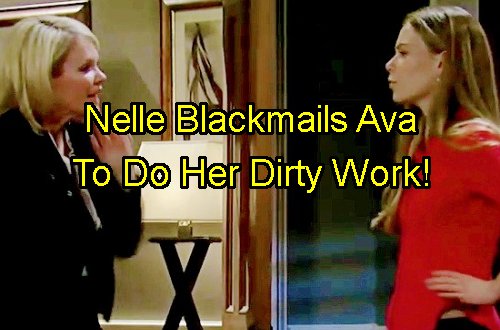 New General Hospital (GH) spoilers tease that Nelle Hayes (Chloe Lanier) gets some dirt on Ava Jerome (Maura West) in coming days and will have her under her thumb. This can help Nelle advance her plans to mess up Carly Corinthos’ (Laura Wright) life.

Scotty tried once to talk Lucy Coe (Lynn Herring) about the pills but she figured out quickly that he was working her over as a favor to his client Ava. Lucy got irritated so Scotty had to give up for the moment. But under frantic pressure from Ava, he’ll try again.

This time, according to GH spoilers, Scotty will pull a dirty trick on Lucy and could snag the pills. But that won’t help Ava if Nelle overhears her talking to Scotty and spills the beans by reiterating the medication swap and what it did to Morgan resulting in his death.

Most people wouldn’t have an expositional conversation outlining the whole plot but it’s Port Charles, so we know it will go down like that. That means Nelle will hear what Ava has done and then she can do whatever she wants with that information.

Nelle will threaten Ava who will try and deny what she’s done but Nelle has the goods on her. That means Nelle can force Ava to help her with her revenge plans against Carly for the black market kidney. This won’t be too much of a stretch for Ava.

The lady mobster doesn’t like Carly so it won’t be too much of a hardship for Ava to help Nelle take her down. But Ava also doesn’t like being threatened and her life being at risk, so Nelle might need to watch her back if this is the way the story line plays out.

Even if Scotty can get the pills back from Lucy, there’s always the chance that Lucy will run to Carly and tell her that she thinks Ava was sleeping with Morgan before he died. That’s bad enough but if Nelle or Lucy mentions the bottle of pills to Carly, Ava is dead meat.

It seems that Carly will eventually find out what Ava did to her son, but whether it’s Nelle or Lucy that helps her figure it out we don’t know yet. It seems likely that Nelle will use the information she has to get Ava to do her bidding.

Nelle has evil plans for Carly, Sonny, Michael Quartermaine (Chad Duell) and Josslyn Jacks (Eden McCoy). That’s a lot to accomplish by herself. With Ava as a partner in crime, it will be easier for her to punish them all for her stolen kidney.

What do you think GH fans? Will Nelle catch Ava and use the information to her advantage? Share your comments on the upcoming action that overlaps scheming Nelle and awful Ava and be sure to check back with CDL often for the latest General Hospital spoilers and news.